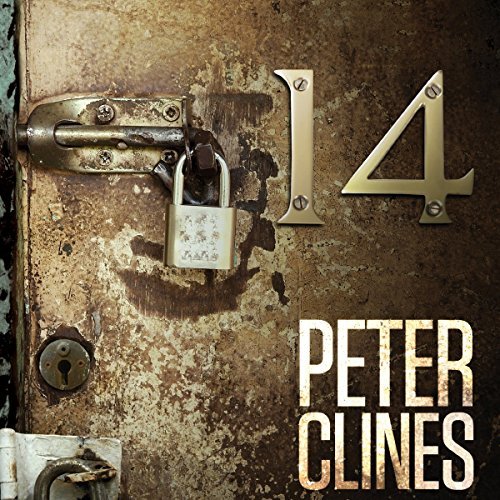 When Nate moves into his new apartment and sees apartment 14 with padlocks outside the door, he thinks it’s strange, but the rent is low and it seems like a nice place so he thinks nothing of it. But with mutant cockroaches, his kitchen light only emitting glowing black light no matter what bulb he puts in, and his neighbours apartments all totally different than what they should be, He starts to realise that there is something strange about this place. But the more he digs, the more questions are raised and Nate needs help to get to the bottom of it. With the help of Xela, Veek, Tim and some more of his neighbours, they soon find out that a locked door is locked for a reason!!

This book totally exceeded my expectations! I thought that it was a horror, and while it is, it’s also a mystery. an adventure and a sci fi book all rolled into one incredible read.

The plot was slow to start and took a while to fully get going, but the build up was much needed and the suspense of what the building was just made it all the more exciting. When we find out the answers to some of the questions I actually gasped out loud because it was amazingly done!!! You think you know where it’s going, but believe me when I say that you have no idea! The first half of the book is setting the scene for the twists and turns of the second half!! It was expertly done.

There are quite a few characters, but all play a part and all are well written and developed. I loved Nate, he is an ordinary guy who hates his job and is just trying to save money by moving into the apartment. The little things about the place start to niggle at him and he has t get to the bottom of the mystery. He was tenacious! Veek was a mystery because of all her computer equipment and I loved finding out what she did. Tim was another mystery because of his knowledge and the way he “read that in a book”!! I became invested in each of them and their story.

In all, this book was amazing. It had so many elements that I love in a book and I devoured it. There are times where you might have to suspend disbelief but it just makes it more enjoyable to read!! A truly unique, imaginative and surprising read and one I highly recommend.

Ray Porter was phenomenal in this. His range of tones and voices brought each character to life and made it incredibly easy to follow who was talking at any given time. He also captured the atmosphere of the story perfectly. I was hooked right from the start!!

Peter Clines grew up in the Stephen King fallout zone of Maine and–inspired by comic books, Star Wars, and Saturday morning cartoons–started writing at the age of eight with his first epic novel, LIZARD MEN FROM THE CENTER OF THE EARTH.

He made his first writing sale at age seventeen to a local newspaper, and at the age of nineteen he completed his quadruple-PhD studies in English literature, archaeology, quantum physics, and interpretive dance. In 2008, while surfing Hawaii’s Keauwaula Beach, he thought up a viable way to maintain cold fusion that would also solve world hunger, but forgot all about it when he ran into actress Yvonne Strahvorski back on the beach and she offered to buy him a drink. He was the inspiration for both the epic poem “Beowulf” and the motion picture -Raiders of the Lost Ark-, and is single-handedly responsible for repelling the Martian Invasion of 1938 that occurred in Grovers Mills, New Jersey. Eleven sonnets he wrote to impress a girl in high school were all later found and attributed to Shakespeare. He is the author of numerous short stories, EX-HEROES, EX-PATRIOTS, –14–, THE EERIE ADVENTURES OF THE LYCANTHROPE ROBINSON CRUSOE, and an as-yet-undiscovered Dead Sea Scroll.

There is compelling evidence that he is, in fact, the Lindbergh baby.

2 thoughts on “14 by Peter Clines (Narrated by Ray Porter)”