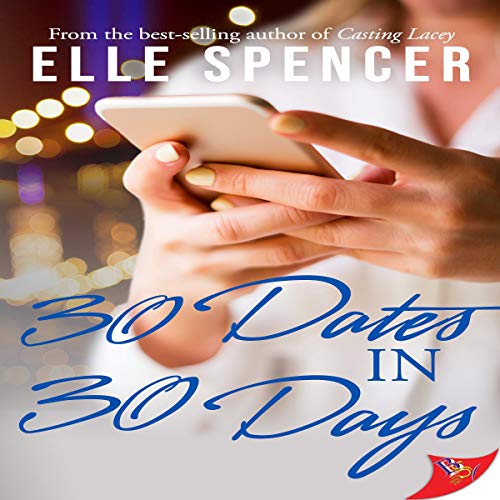 Wow This Was Cute

This book made me laugh and cry.  I can’t believe how well written it was. I genuinely finished this in on day. I couldn’t put it down.

I took about 12 hours between finishing it and writing my review because I wanted to see if I still thought about it in the morning (I totally was). I’ll try and reel in my enthusiasm but just know that I haven’t felt this way about a book, especially a romance book, in a long time.

The story revolves around Veronica Welch.  She’s about to make partner at the firm she’s working at and almost everything is going her way.  Everything except her love life.  She just simply doesn’t have enough time or energy to devote to dating and getting to know someone.  Insert her assistant. She signs her up for a dating site and sets up a blind date for her.  She get’s Veronica to agree to go on some dates (30 dates in 30 days) with different women so that she can find someone.

The dates themselves were hilarious and exactly what it’s like in the dating scene (at least it was when I remembered it).  All the dates were held in the same quiet bar and the bartenders and local regulars start to take notice of what V’s doing. Especially one of the part-time bartenders who is a full-time Wedding Photographer.

I won’t go into too much more detail, but I thought that this book reminded me a lot of a better version of 27 Dressed.  I would go see this movie if it was ever turned into one because it was so damn cute. The interaction, the drama, and the emotions were all spot on. I mean it when I said I could not put this down.  I listened to it all day Christmas Eve and finished it in one day. Spencer has catapulted herself to the top of my list and I must listen to more of her audiobooks.

The narration by Lori Prince took this to another level.  She slows down when things get emotional and speeds up when needed. Her narration really made this book fly by.

Veronica Welch has made it. She’s about to be named a partner at one of the most prestigious law firms in New York City. She’s on top of the world, except for one tiny ridiculous thing: She promised herself she’d be married by 35. After a drink too many, she accidentally lets her “life plan” slip to Bea, her steadfast, ever-meddling assistant, and now Bea won’t let the idea go.

Rachel Monaghan doesn’t do serious relationships. As a busy wedding photographer, she’s jaded about lasting love, has a thriving repeat business, and hasn’t had much luck with love herself. While bartending at her cousin’s bar, Rachel learns of Bea’s plan to get her boss married off by scheduling 30 dates in 30 days.

In this sophisticated contemporary romance, Veronica Welch tries to find love in the most efficient way possible while Rachel Monaghan avoids love at all costs. What could possibly go wrong?