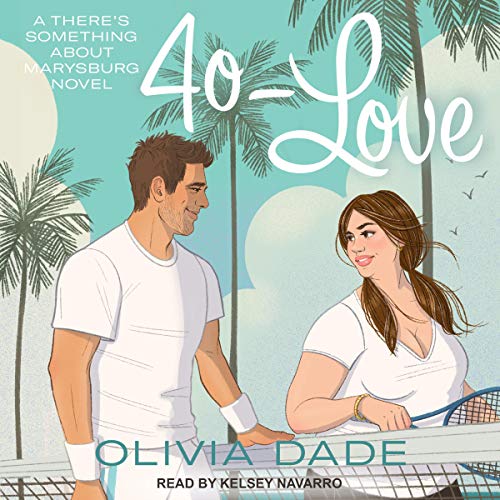 I just finished up the first book in the There’s Something About Marysburg series and really enjoyed it. I thought that Dade’s writing style was perfect and had that old-school Rom-Com feel to it. Jumping into 40-Love, I figured I was going to “know” the character, but even then – I went into it with an expectation based on Dade’s last book.

At first, I thought I wasn’t going to enjoy it as much, but as the book was building and I was getting to know the characters more I really fell in love with it. I think what I like about both books I’ve read in this series is that they feel like real people. They have flaws and are nervous about falling in love for different reasons. Not everyone was cheated on or left at the alter. Sometimes we’re hurt in ways that we don’t even recognize until we find a person who would never hurt us like that. All of Dade’s stories seem to be built around this premise and it makes them really enjoyable.

40-Love’s two characters, Tess and Lucas were cute and made me smile and laugh throughout. I thought that their chemistry was strained at first but as the book continued I realized that Dade threw that curveball in there to throw me off of them for a bit. So that once things progressed I was going to be even happier. Well, it worked.

Kelsey Navarro’s narration really turned a great book into an even better one. She was able to give life to Tess. The moments where Tess was stressed out (the opening of the book especially), Navarro nailed that tension in her voice. I thought she did a great job with Lucas as well. Overall her performance really helped the back and forth volley that Tess and Lucas had (and that Dade wrote).

This match is no game.

When a rogue wave strips Tess Dunn of her bikini top, desperate, half-naked times call for desperate, please-cover-me-kids-are-coming-closer measures. Enter Lucas Karlsson, aka that flirty Swede-in-the-water-nearby. When he prevents her bare buoys from being exposed to fellow vacationers, even an ocean can’t drown the sparks that fly.

Lucas, a former top-level tennis pro now giving lessons at the resort, fled there after the abrupt, painful end to his injury-plagued career. But he’s finally ready to move on with his life – and after a few late-night hands-on sessions with Tess, he’s eager to prove he’s the ace she wants.

But this match comes with challenges: She’s 40, and at 26, he’s barely old enough to rent a car. Worse, they only have two weeks together before Tess returns to her assistant-principal life in Virginia. During that brief time, they’ll have to play hard, take a few risks, and find out whether their chemistry is a one-shot wonder…or whether they’re meant to be doubles partners for life.

40-Love by Olivia Dade
Narrator: Kelsey Navarro
Length: 10 hrs and 1 min
Series: There's Something About Marysburg #2
Published by Tantor Audio on April 13th 2021
Genres: Romance, RomCom
Format: Audiobook
Buy from Audible
Also by this author: Teach Me
Also in this series: Teach Me

Teach Me (There’s Something About