A Heart To Trust by A.L. Brooks (Narrated by Anastasia Watley) 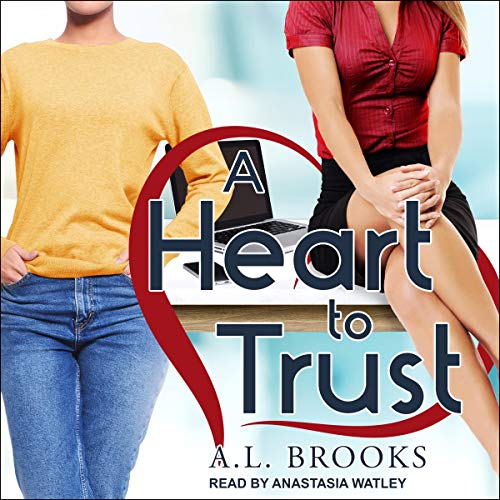 This isn’t my first A.L. Brooks novel and there’s a reason for that. I find myself really enjoying the way her stories build and the overall feeling they have. So, when I saw this one pop up I had to check it out. At first I wasn’t sure what I was getting myself into, but then I quickly realized that I was going to love the story and the characters.

A Heart to Trust is a combination of an enemies to lovers and a slow burn romance. It’s ETL but not for the typical reasons that I’m used to. It was a combination of the way that one character was with other people after being hurt and someone out there trying to sway someone else’s feelings (tip-toeing because of spoilers). I will say that I love the name given to the character who ends up being a problem later in the book (it was an ex-girlfriends name and I could 100% see her doing that).

The setting of A Heart to Trust was interesting too. It was set in the corporate world of TV, and set around production assistants who were all fighting for a job. The scenes related to their first assignment were genius and had me smiling at the payoff. Along with, well, pretty much the rest of the story. Even the dramatic scenes ended up leaving me with a smile on my face because I could feel where Brooks was building.

Overall, I thought that this was a really nice slow burn romance. Brooks is quickly becoming one of my favorite authors and I’ll continue to check her books out.

Change is not Jenny Quinn’s strong suit, but she’s happy enough with her easy-going life, friends, and job as a TV production assistant. That is until a company shake-up foists the infuriating Olivia Sinclair on her. The woman is uptight, snobby, and has some perfect and famous motor-racing husband.

TV and theater producer Olivia moved to New York from the UK to marry her longtime friend. It’s a sham marriage, a favor to a man she loves as a brother, but the strain is beginning to take its toll. How can she even meet women when she’s the picture of heterosexual bliss? Add in her stressful new job, an irritating colleague called Jenny, who thinks being goofy is some kind of admirable work ethic, and life can be a grind some days. The worst part isn’t the office politics or clashing personalities, but the fact there’s an attraction between both women that’s gradually becoming impossible to ignore.

So…should they stop ignoring it? That would mean learning to trust your heart that this is the right woman. And that’s a huge step.

The Lawyer’s Luck by Piper Huguley