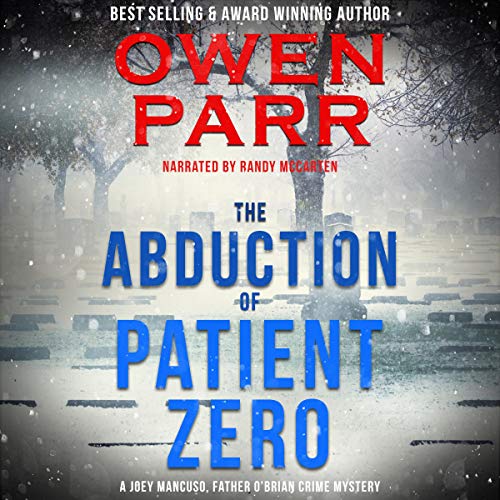 Parr Has Done It Again

I did not read the synopsis before diving into this and honestly, I still haven’t read it while starting my review. Patient Zero is usually a bio-thriller or (especially scary in March 2020) a horror book about the spread of a nasty virus.  The Abduction of Patient Zero is none of these things. Honestly, I didn’t get the reference to patient zero until almost the final few chapters of the book, but once I got there it all fell into place. I won’t ruin or spoil it for you, but if you’ve read any of the other books in this series you’ll enjoy this one.

This is the sixth book in the Joey Mancuso and Father O’Brian Mystery series and it was another great book.  I honestly was thinking about the next book in this series recently. I wanted a good mystery and one that had great characters in it – so I thought “I hope Owen Parr writes another book soon!” Thankfully, that day came and I flew through this book. I read it in basically one day, almost one sitting. I couldn’t put it down. Parr kept my attention with both familiar characters but an insanely scary concept.

As I just mentioned, the characters are familiar to me now so Parr doesn’t try too hard to explain who they are and what they do. So jumping in at this book might be a bit confusing but could probably be done.  They only mention a few of the other cases that they’ve solved and it wasn’t written in a way that would make it totally confusing for a newcomer. That said, if you want to jump into the series – I recommend you start at the beginning because the stories are amazing. They have that old-school Sherlock Holmes feel to them (if you’ve read them you’ll understand why I say that).  They’re clever, but most of all they are good. And by good I mean that they are out for the good guys.  They are known for fighting for the victims more than anyone else and always find the bad guy(s).

Overall, The Abduction of Patient Zero was an insanely enjoyable read. Parr has done it again, writing a book that I couldn’t put down.

The narration changed hands in this book and I’m impressed. Sometimes when that’s done, especially five books in a series, it can be messed up pretty bad. Because I read a lot of audiobook, I understand the reasoning that a change needs to happen, but in this case I think that the new narrator respected the old narrator enough to do his old work justice while throwing just a slight spin on it to make it his own.  Bravo and a slow clap to Randy McCarten for taking over this series and making it have the same overall vibe that the other five books had.

In his sixth labyrinthine hard-boiled puzzler, NYC private eye Joey Mancuso finds himself neck-deep in a maze of a murder mystery – the kind that weaves through military secrets and international espionage – at the center of which is the woman he loves.

The vic Oscar Stanton (name etched into his designer trousers) was gunned down in Washington Square Park in broad daylight, just after a lunchtime rendezvous with a business associate. A quick and dirty ID reveals the real Oscar Stanton was working in cybersecurities for the DO and, perhaps unsurprisingly, was KIA in Afghanistan. And Mancuso’s antics tend to weave a winding yarn as intricately connected as a satisfying Sherlock Holmes.

Despite a recent drop in New York City’s crime rate, the PI business is booming for acutely astute investigator Joey Mancuso and his partner-in-solving-crime Father Dominic O’Brian (who happens to be his half-brother). So, it’s no surprise when Mancuso is called to the scene of a particularly gruesome and utterly confounding Lower Manhattan murder one otherwise pleasant afternoon.

As a complex white collar crime case unfolds with the usual barrage of infighting between the NYPD, CIA, FBI, and military intelligence, it becomes increasingly evident that despite personal ties to the case, Mancuso and his associates are Marcy’s only hope.

They must race the clock – and a likely well-connected killer, not to mention the intelligence forces the killer certainly has in his back pocket – to catch the FBI’s missing suspect and clear Marcy, before she’s falsely accused of espionage and murder or goes the way of the men surrounding her.

Who will like this: It’s Matt Scudder meets Father Brown. Fans of both New York PI novels and police procedurals like those by Raymond Chandler, Joseph Wambaugh, Lawrence Block, and Rex Stout, and clerical mysteries will love this offbeat detective team. As will devotees of the greatest detective of all time – Sir Arthur Conan Doyle’s Sherlock Holmes.