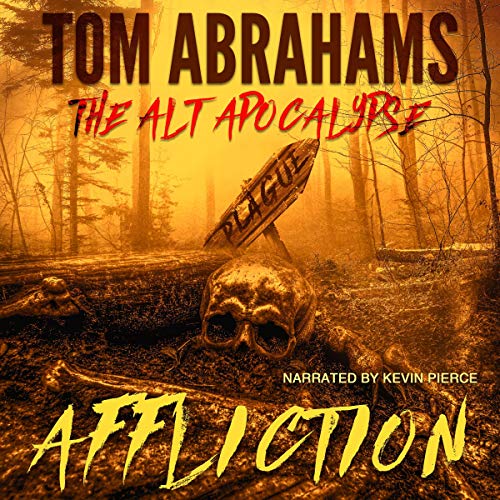 While chatting with another reviewer (and co-blogger) about Affliction we were both talking about how much we enjoyed this book. And honestly, I think it might be my favorite in the series.  There is something about the tension that kept building and building (that never really goes away) that really made Affliction suspenseful.

Early into my boarding of the Alt Apocalypse hype train, I heard that Tom was going to write a book about some sort of plague/virus/etc.  I was scared.  I wasn’t scared because I didn’t think he could do it, I knew he could.  I was scared that it wasn’t going to be as in depth or descriptive (read: sciencey) as I hoped it would be.  I’m glad to report that I was dead wrong. A lot of authors will shy away from real science and give you the cookie cutter “there was a virus and it killed 99% of the population”, but he did not.

Abrahams kills it with Affliction.  The spreading plague that he describes is so real it makes the book even scarier.  He was able to take real things, throw them into a test tube, shake them up, and make something genuinely terrifying.

I’ve been trying to figure out how to talk about this next part without spoiling everything.  But I will say if you have not read the other books in this series – it will be slightly spoiler-ish coming up here.  The best part about Affliction other than all the things I’ve already stated above is the fact that Abrahams starts to connect the dots a little bit.  You get that deja vu sense (along with the characters) combined with the gnawing sense that you have a feeling where he’s going. I absolutely love that he’s starting to tie the loose ends together and beginning to complete the full story arc but I can also tell that we have a couple more books to go.

The characters, who we’re all familiar with by now, 4 books in, are somehow more relatable and more real in Affliction.  I don’t know how he did it, but he made it just so damn genuine that you actually feel for them.  A few scenes I was really worried about some of them. And he even tied up some of the loose ends that I didn’t know were out there and talked about a specific character and how they every time without fail they die in some gruesome way.

In a momentum shift – Abrahams went from non-stop action in Torrent to an edge-of-your-seat suspense book and in my opinion, it was exactly what the series needed.  It doesn’t shake up the whole series but it definitely sets things up for later.

I honestly scrutinized this book a lot trying to find something to complain about (I know Tom reads these and takes the bad and the good in stride).  But there wasn’t anything in Affliction that I didn’t like.  It was a pure suspenseful thrill ride from beginning to end. Easily one of the best books I’ve read in 2018.

A relentless disease. No cure. And no way to stop it.

It explores survival under the most extreme circumstances, but with a twist (and no cliffhangers). This series, which can be heard in any order, features the same core characters in each complete story. But every book dunks them into a new, alternate apocalypse: a nuclear holocaust, an earthquake, a flood, a wildfire, a hurricane, a plague, and even zombies.

Different heroes will emerge in each novel. Different characters will survive and perish. Your favorite character dies in one book? He or she will be back in the next. In the end you'll unwind the loose thread that connects every character and every stand-alone story.

In Affliction, Abrahams tells the story of a mysterious team of researchers, four college friends, an ex-con, a lonely fry cook, and a secretive group of prepared civilians as they each battle to survive in southern California after an outbreak of a new, deadly disease with no known cure.

Can they find a way to stop it? Can they survive in an afflicted world?