The Agent G Omnibus: Volume One by C.T. Phipps (Narrated by Jeffrey Kafer) 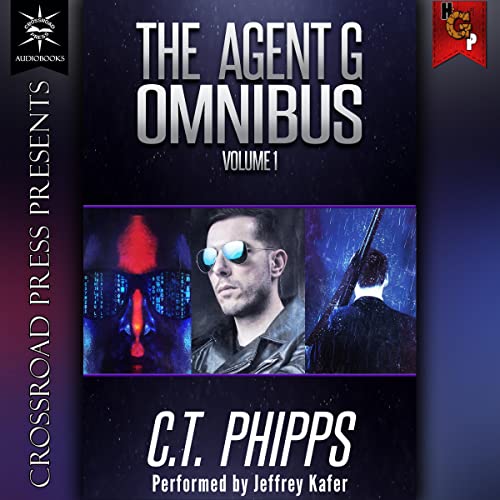 I’ve read and reviewed each of these books individually since I read them as they came out. Seeing the omnibus always makes me so happy because readers can get all three excellent stories in one package. This is no different than that. Phipps is able to write stories that always jump off of the page. The Agent G series is definitely one of them. I’m going back through my original reviews to see what I compared it to because it reminded me of a few different things in pop culture (as most of Phipps’ stuff does). But, it was also one of those stories that I was instantly attached to.

Without further ado, here are my reviews of the three books within the Agent G Omnibus.

Agent G: Infiltrator is a fast-paced technothriller about a futuristic assassin appropriately named “G”.  G’s job is to kill people for money.  He has to do it for 10 years and they will give him his memory back.  I can tell you one thing, this is way more than a story about a sci-fi assassin.

My honest “blurb” explanation of this book is Jason Bourne meets Hitman with a little bit of an overarching feeling of Memento.  And to be honest, I’m proud of that explanation.  There are parts of this book that felt like they were pulling from the Bourne books and movies while other parts felt like they were expanded on from the Hitman video games (I never saw the movie).

C.T. Phipps can write.  Wow, can he write.  He was able to make me laugh one second and be completely engulfed in another theory the next.  G was easily one of the most memorable characters I’ve read in a long time.  He had an attitude that I can relate to and every time he was snarky or said something smart I had a good chuckle.  A lot of books like this can be so serious throughout making them feel longer than they are, but the comedic breaks throughout this really made the pages and hours fly by.

Tie that with the incredible narration by narrating phenom Jeffrey Kafer and you have a hit.  Kafer was perfect for this book.  I listen to a lot of books and this was easily one of the best fits I’ve heard in quite some time.

Every time I thought I had this book figured out I was wrong and it threw me for another loop.  There were a few times that I thought I’d figured the ending out — nope! Not even close, nice try Brian.

Overall, Agent G: Infiltrator was an incredibly enjoyable technothriller sci-fi assassin book that was fun.  You can’t say a lot of books are fun… but I enjoyed the heck out of it.  If you enjoy conspiracy theories, the singularity, cyborgs, and good old clean assassin fun — Agent G: Infiltrator is definitely for you.

It’s really hard to get “Hitman” out of my head when I’m reading an Agent G book. Part of it is because of the bio-roids (spelling?) part and another part is how they are basically programmed to kill any target they are given.

But in all seriousness Saboteur feels like a love letter to the spy thriller.  It combines a ton of different stories into one including Mr. and Mrs. Smith (G and S), Spy vs Spy, along with some aspect of Bond and Bourne thrown in for good measure.  Shake all of these up, throw in a ton of sarcasm and wit and you have Agent G.

(This part could contain a brief spoiler) There were a few parts of Saboteur that threw me for a loop, and honestly, I can’t dive into any of them for fear of giving the plot away.  But I’ll mention some hints.  Brother, double-cross, and “who do you really work for?” to just name a few.  I don’t think that any of them on their own will give any major things away, but I’m sorry if it spoils anything for you.

Phipps writes in all sorts of genres and each one of them feels like a love letter to that genre in a way, but these Agent G books are just so damn good. The marriage of science fiction and spy thriller really sets the Agent G series apart in my eyes. I think that the near future and black-tech in them really hit some need that I have in books.  They are far enough into the future for G to be a real functioning… thing but they are still dealing with some of the same crap that we’re dealing with today. On top of that G is fighting for his life and the lives of other letters while trying to expose anyone he can in an attempt to clear up all of the bribery and hush money.

Overall, I thought that Saboteur was a blast of a story from beginning to end that kept me on the edge of my seat.  Phipps wrote a story that felt real even though it was set in the future. And Kafer’s performance took it to the next level.

A Great Book With Great Characters

This is not my first Agent G story and it’s also not even close to my first C.T. Phipps one either. There’s a reason that I keep going back to them. They’re an absolute blast to read from beginning to end. In each story, Phipps writes he’s able to fit a ton of action, emotion, and a lot of pop references (whether they’re real or from his universe).

Agent G: Assassin was a great story both by itself and in the Agent G universe. It was fast-paced with a lot of heart. G (who now goes by Case) still is talking about trying to be an assassin without killing people and he’s trying to be better but he keeps getting dragged into more and more. Honestly, as this series goes on it keeps getting better and better. The references to other stories, universes, and pop culture always have me cracking up (especially when he quotes an “old” movie or show and no one gets it).

I also like the time jump and the things that have happened between this book and book two (trying not to spoil). The chat about the volcanic eruption was interesting and added a lot to the story, definitely pulling at the heartstrings a bit here and there.

Overall, a great addition to the series and a great book itself. Agent G: Assassin was definitely one that I started and finished within a few sittings – I couldn’t put it down. Of course, the great narration by Jeffrey Kafer doesn’t hurt it either. He’s able to become Case and really helps his character shine — especially the snarky bits.

From the best-selling author of The Supervillainy Saga.

“Black Technology has made murder a billion-dollar industry.”

The International Refugee Society has 26 cybernetically enhanced “Letters”, and for the right price, they’ll eliminate anyone. They’ve given up their families and their memories for 10 years of service with the promise of a life of luxury awaiting them.

Agent G is one of these “Letters”, but clues to his past are starting to emerge while he’s on a dangerous mission to infiltrate the Society’s most dangerous competitor. In the midst of all the violence, subterfuge, and deceit, he’ll need to keep his wits about him and trust sparingly.

After all, if an organization will kill for money, what would they do to keep the truth hidden?

The Agent G Omnibus contains the first three volumes of the Agent G series (Infiltrator, Saboteur, and Assassin). Follow G as he slowly unravels the truth of his past, the conspiracy behind the International Refugee Society, and his allies. The Agent G series follows the transformation of our present-day world into a terrifying cyberpunk future as man merges with machine.