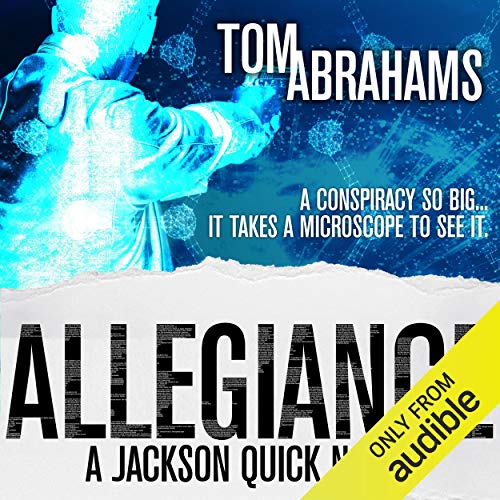 A Thriller I Couldn’t Put Down

I honestly went into this pretty blind. I mean, as blind as you can when you’ve already read almost every other book that an author has put out. So, I knew going into it what kind of action to expect, but I wasn’t sure what I was going to get story-wise. Of course, Abrahams gave me everything I wanted and more. Allegiance throws you into the deep end right away and there are scenes where I kept thinking “what in the heck is going on here” within the first few minutes.

Abrahams, as in all his other books, is able to write a story that has so much truth in it that it makes it almost creepy to read. His background, for those unsure, is a new reporter, and one of the characters in this book is that. So almost every scene with him in it I think “how much of this is true or would really happen this way” and I know that most of it is likely true.

The character of Jackson Quick was fascinating. He’s one of those action/thriller main characters that through almost half of the book you think “how is he so good at this” – but with Allegiance, Abrahams had Quick questioning it himself. He even threw in some backstory and flashbacks to start to color in Quick’s life and allow us to piece together why he was better at the things he was doing than the average Joe would be.

Overall, Allegiance was an incredible start to what I hope is a great thriller series. I can’t wait to dive into more stories with him and I can’t wait to figure out how much more Abrahams is going to give us about his backstory.  Add in the excellent narration by Jay Snyder and you have an excellent story that I couldn’t put down.

A conspiracy so big, it takes a microscope to see it.

Beer, redheads, and politics…Jackson Quick should have known better. First, he trusted a Texas politician. Then he fell for a leggy woman. Worst of all, he drank a beer that tasted funny.

Now, he’s running for his life and trying to save the world. When Quick is kidnapped and interrogated about the encrypted tech he’s been charged by his powerful boss to deliver, he has no idea it’s connected to a missing research scientist on the verge of an earth-shaking breakthrough. Nor is he aware of its proximity to the attempted assassination of a political candidate.

Now he has to piece all of it together and stop the unthinkable from becoming a reality.

Allegiance is book one of the trilogy of Jackson Quick Sci-Fi Adventures and introduces the unwitting hero with a secret past and a penchant for uncovering the truth. It’s perfect for fans of Michael Crichton, Pierce Brown, and John Scalzi.