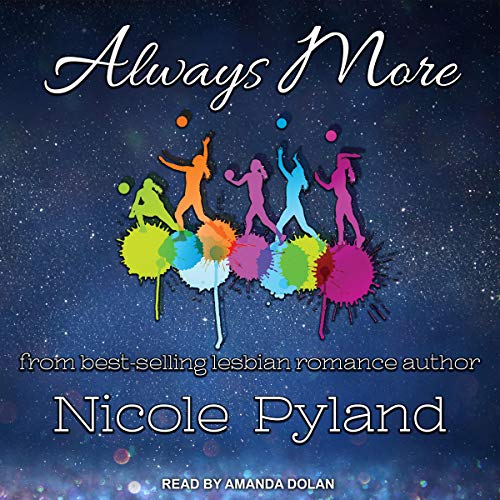 Always More isn’t the first book from Nicole Pyland that I’ve read, and there’s a reason for that. I previously read All The Love Songs and wrote one of my longest reviews about that book. Pyland is able to cover so many different topics in one single story that I’m shocked every time.

This time she was able to cover topics like playing sports as a women, women’s sports leagues (and their popularity abroad versus at home), first time relationships, first times, falling for someone you didn’t expect, and so much more.

Always More was insanely cute. I kept waiting for the bomb to drop and turn it into a book that had everything but also had the “we have to be apart to show how much we really love each other”. But this time, the story revolved around family (or “family” would be better suited). Along with dealing with past traumas and moving on. The drama was within the stories that Wyatt had instead of between Wyatt and Everly (though there were still some fights).

I don’t know what more to say about this. I had a smile on my face almost the entire time. Pyland kept me interested and I wanted to know what was going to happen to Wyatt and Everly. I genuinely cared for them and wanted good things.

It also seemed to be posted as the first book in a sports series – and I can’t wait to see what other stories there are. Pyland put so much thought and research into the volleyball aspect of this, I’m sure she’ll be able to write any sport and make it enjoyable.

Everly Holman is between an internship and, hopefully, finding her dream job when she finds an online listing she thinks will be perfect for her. As a relatively new sports psychologist, she’s worried she won’t find the right place for herself. When she applies for a job with the Los Angeles Legends, the professional women’s volleyball team, she finally feels at home.

Wyatt Wicked is the number one volleyball player in the world. She could play in any professional league and had played in many during her career. When the US starts the first professional women’s league, she’s eager to play on her home soil and finally do the thing she loves most in her home country.

Wyatt’s not one to trust psychology in sports. But when she meets Everly Holman, Wyatt not only starts trusting the woman to help improve her game, she also sees Everly as much more than the team doctor. Unfortunately for her, Everly might not be willing to risk her career over their growing feelings. As they both work to establish the fledgling league, they discover that, sometimes, falling in love is worth the possibility of losing everything.