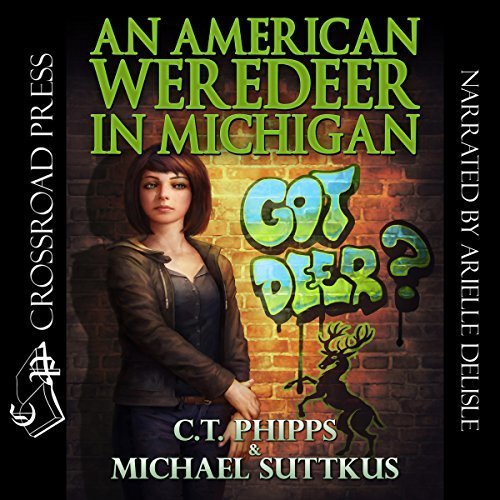 See what I did there? If you don’t like that, then this book isn’t for you.  Though An American Weredeer in Michigan has a lot fewer puns than the original book in the series – they were still there and made me laugh just as hard. I can imagine Phipps and Suttkus chatting with each other trying to come up with the ultimate deer-related pun. I’m also curious which one they each liked the most.

An American Weredeer in Michigan (man, that’s a mouthful – that’s what she said… sorry) is one of those stories that you just enjoy.  It was pure enjoyment from beginning to end – Phipps and Suttkus really know how to write characters that you want to follow.  Jane is endearing (yes, I spelled it right this time) and a little doe-eyed at times, but she’s also funny and relentless. I just love everything about her.  If she were a real person I could definitely see being friends with her.

American Weredeer and the entire Bright Falls Mysteries series was one that I jumped into not fully sure what to expect, but I came out a completely changed man.  Phipps and Suttkus have this way of writing that drew me in and won’t let me go.  They’re all so enjoyable and fun from beginning to end.

There was more teenage drama in this one, but what do you expect when you have a 19-year-old main character.  There’s going to be drama – it’s inevitable. And I thought that it was well thought out and appropriate for the amount of drama and stress that Jane and co have had to go through.

One of my particularly favorite scenes (there shouldn’t be any spoilers here) was when Jane pets and nuzzles the Werewolf version of her best friend – to which she replies “you know you’re the only one I let do this?” I don’t know why I just found that perfect and hilarious.  I think partially because of the character building and dynamic between the two of them, but it was great.

I thought that Arielle DeLisle was perfect once again for the role of Jane and the overall narrator of the book.  She has a young-sounding voice that lends itself well to the character that was written.  She has an easy to listen to voice that made the story fly by.

Overall, I think this might have been even better than the first book – and it intrigues me to see what else can happen in Bright Falls. Phipps and Suttkus – you have me hooked!

From the best-selling author of The Rules of Supervillainy:

Life is not easy for the world’s first weredeer detective. A simple hike turns into a media circus when Jane Doe, her best friend Emma, and a pair of monster hunters find a mass grave. Determined to find the parties responsible, Jane soon discovers a sinister cult leader has decided to make Bright Falls, Michigan the home of his corrupt religion.

As if this wasn’t complicating her life enough, Jane also has to decide whether or not she wants to begin a relationship with FBI Special Agent Alex Timmons or local crime lord Lucien Lyons. Both men are determined to get to the bottom of the crime she’s investigating but may be distracted by their own agendas–as well as their love for Jane.