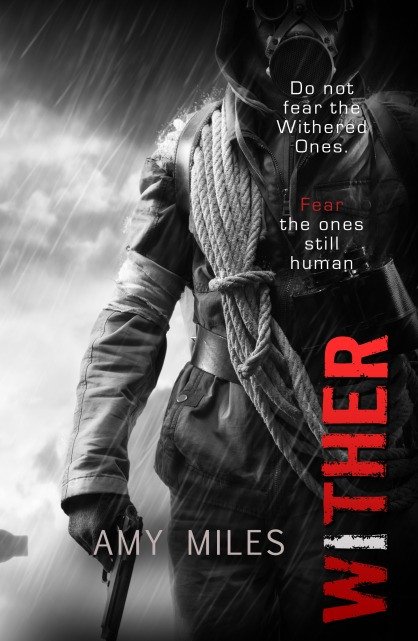 This is a tough one for me.  I REALLY wanted to like this book, but it had more of a vampire feeling than a zombie/disease book.  I know that they’re similar genres but they are not the same.  The withered ones that Amy Miles describes reminded me of a mixture of The Walking Dead, 28 Days Later mixed a little with I Am Legend.

The main character didn’t have enough back story in the first 2 chapters to really draw me in, and it dragged on for me from there.  I wanted to like her, but I wasn’t give a good reason.  I was thrown into the mix of her talking about disliking her mother and then basically watching her be butchered in front of her.  No character development or building before this happens.  I’m not sure why this bothered me so much, but I guess it’s just because I never really liked her.  I’ve read some amazing stories with female protagonists from the Feed series, Hunger Games, and Divergent (among others).

Mile’s writing is superb though.  It is a fast-paced book written to those who like blood and guts, gore and unrequited love.  I won’t ruin the ending for you, but it is depressing and dark.  Just be prepared for it.

I didn’t hate the book, but it wasn’t my favorite either.  I don’t believe I will be reading the next in the series, but you never know where life will find me when it releases.

I received a free copy of this book from NetGalley and the publisher for an honest review.

The world went to hell two weeks ago and twenty-one-year-old, Avery Whitlock, just watched it happen.

After an epidemic swept across America like a biblical plague, the government leapt into the fray with the release of the MONE vaccine. What was meant to bring salvation to the remaining survivors instead brought damnation. Human mutations began within days of the drug’s release and the Withered Ones were born. People not alive but not entirely dead either. They walked the streets, unblinking and unaware. A zombie, for all intents and purposes, but nothing like anyone anticipated.

Growing up on the streets taught Avery how to care for herself, but no amount of self defense classes at the Y could have prepared her for the outbreak of deadly gangs, a corrupt government bent on using her blood for experiments and the depths to which desperate people would go to survive. She soon discovered that it was not the Withered Ones that she needed to fear, but those still human. The ones who knew how to put a gun to her head when they wanted something from her.

Avery was forced to decide how far would she be willing to go to survive just one more day.

Wither is a psychological thriller that poses the question…what if the zombies aren’t the ones we should fear? What if it’s human nature instead?

Author Amy Miles has always been a bit of a dreamer. Growing up as an only child, and a military brat to boot, she spent countless hours escaping into the pages of a book, only to spend the following days creating a new idea of how to twist up the story to make it unique. Since becoming a mother, Amy has slowly nourished her love of the written word while snatching writing time in the midst of soiled diapers, tumbling over legos and peering around mounds of laundry and dishes that never seem to go away. Once her only son started school, Amy was free to let her fingers dive into dark mythology, tales of betrayal and love, and explore human nature in its rawest form. Her love of seeing the world from a different angle bloomed.

Amy is the author of several novels, including her popular young adult immortal books, The Arotas Series, which are an Amazon and iBooks bestselling series. Unwilling to be defined by any one genre, she proceeded to flip over to a science fiction/fantasy based idea with her Rising Trilogy. She then dove into contemporary romance with her novel, Captivate and explored the depths of her own faith with In Your Embrace.

She is currently working on completing her Immortal Rose trilogy, a prequel to her Arotas novels. She has also embarked on two new journeys this year, one in the form of a co-written banshee trilogy, The Hallowed Realms, which is currently represented by GH Literary and she breached another genre with her upcoming adult horror novel, Wither.

Want to know what Amy will be working on next?