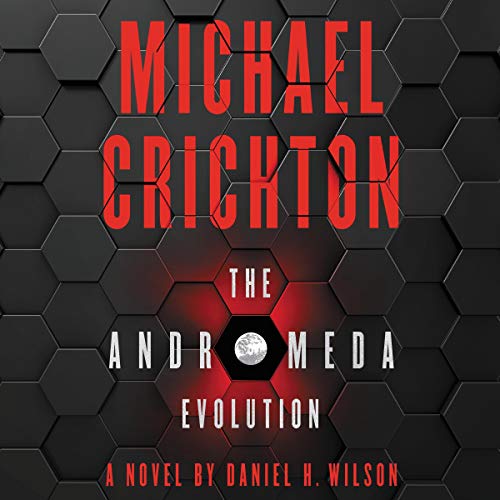 The introduction (written as an acknowledgement) of this story had me questioning my deep knowledge of Crichton and the first novel. It’s basically written as a full-on thank you to a bunch of people who helped with the creation and research of the book.  It goes on to thank people that “survived the event and provided detail about it” to Wilson along with thanking the late, great Dr. Michael Crichton for “bringing light to the original events of the Wildfire team in The Andromeda Strain. Now, I knew going into this that it was fiction and I knew from years ago that Strain was also fiction – but the way that he wrote it tricked my brain enough to make me think that this could have been a real event.  (I believe he even goes on to basically say that we all owe our lives to the teams and that we are all here today due to their work that we wouldn’t have heard of weren’t for his retelling in this book. (insert slow clap… bravo Daniel H. Wilson. Bravo!)

I went into this with some trepidation.  I LOVED The Andromeda Strain. It honestly might have been the first or second book I read of Crichton’s. It literally founded my love for bio-thrillers and set up my absolute love for realistic science (Hard Science) in books that I re-found in my reading renaissance in finding R.C. Bray’s narration of The Martian. So, going into Evolution, I knew I had to keep my hopes out of the clouds. That introduction that I described above kind of threw that out the window. Thankfully, this was better than the half-finished book that was co-authored by one of my favorite all-time authors AFTER Crichton (Micro).

Because this was written in full by another author with cues from Crichton’s first novel – this one had a much better flow from begining to end. Wilson was able to take a story that a lot of us know and love and bring it into the 21st century. He was able to throw in geo-political aspect and obviously update the technology to current (and near future) like Crichton always did.  Crichton always pushed the boundaries with tech because he had the foresight before many others did. Wilson was able to take some of that and ride it out in Evolution and introduced a little bit of tech himself.

Okay, enough of my love letter to the late Crichton, his novels, and the fact that I was like a little boy on Christmas when I originally heard that this was coming out.

The beginning of this felt a little bit slow, but then remembering back to Crichton’s novels – that’s how they started out as well.  Dinosaurs just don’t exist in Jurassic Park, there’s a slow burn to get to the climax.  Andromeda Evolution was just like that.  Wilson spent the entire first almost half of the book setting everything up.  I wasn’t sure what or where it was going but I was along for the ride.

From around the mid-point on, this was an absolute roller coaster.  It was full of action and honestly wasn’t easy to predict.  A few scenes (especially later in the book) I was able to guess, but it was my love of other Crichton novels that fueled the guesses as much as the writing in it.  I had a feeling that something was going to go a certain way and it did (but I was also quite wrong about a few other associations).

The technology used within Andromeda Evolution was believable, just like it was supposed to be.  A stunning fifty years has gone by since the events of the last Andromeda outbreak – and it was taking place in modern (or really close to modern) day.

I went into this skeptical.  I was worried that I wouldn’t like it, but I’m glad I did. It was the perfect predecessor to the first book and a great continuation of a story that felt right.  Sometimes it feels like a money grab to make a sequel – but in this case, the story was well written and explained in such a way that it made sense.  I didn’t know I needed another Andromeda book until I finished this one.

Julia Whelan does a phenomenal job narrating this story.  She added such depth and realism to the characters that not all narrators can pull off.  Her narration definitely took this from being good to great.

Fifty years after The Andromeda Strain made Michael Crichton a household name – and spawned a new genre, the technothriller – the threat returns, in a gripping sequel that is terrifyingly realistic and resonant.

The evolution is coming.

In 1967, an extraterrestrial microbe came crashing down to Earth and nearly ended the human race. Accidental exposure to the particle – designated the Andromeda Strain – killed every resident of the town of Piedmont, Arizona, save for an elderly man and an infant boy. Over the next five days, a team of top scientists assigned to Project Wildfire worked valiantly to save the world from an epidemic of unimaginable proportions. In the moments before a catastrophic nuclear detonation, they succeeded.

In the ensuing decades, research on the microparticle continued. And the world thought it was safe….

Deep inside Fairchild Air Force Base, Project Eternal Vigilance has continued to watch and wait for the Andromeda Strain to reappear. On the verge of being shut down, the project has registered no activity – until now. A Brazilian terrain-mapping drone has detected a bizarre anomaly of otherworldly matter in the middle of the jungle, and, worse yet, the tell-tale chemical signature of the deadly microparticle.

With this shocking discovery, the next-generation Project Wildfire is activated, and a diverse team of experts hailing from all over the world is dispatched to investigate the potentially apocalyptic threat.

But the microbe is growing – evolving. And if the Wildfire team can’t reach the quarantine zone, enter the anomaly, and figure out how to stop it, this new Andromeda Evolution will annihilate all life as we know it.