Welcome to Brian’s Book Blog’s weekly New ‘Free with Audible Plus’ Post for the Week of April 17th. 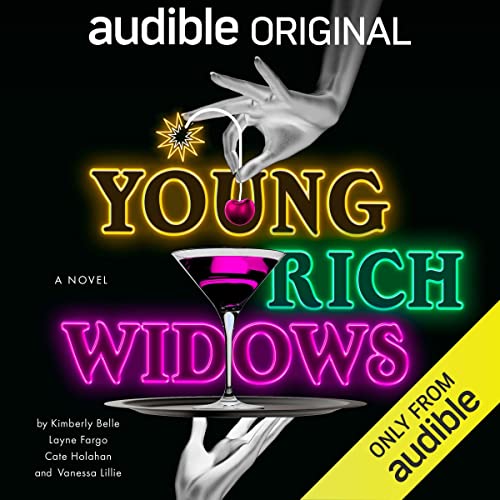 Check out my reviews of other titles narrated by Karissa Vacker

When the four partners of a prominent law firm are killed in a mysterious plane crash, their widows must come together to uncover the truth in this explosive, edge-of-your-seat novel.

It’s 1985 in Providence, Rhode Island, and the four partners of a prominent, mafia-affiliated law firm have been killed in a private jet that went down outside New York City. Four very different women have just lost the loves of their lives: Justine, a former fashion model adjusting to suburban life; Camille, a beautiful, young second wife some suspect is a gold digger; Krystle, committed to leaving the firm to her sons after her husband worked his whole life to support them all; and Meredith, a stripper at the local club who was in a secret relationship with the firm’s sole female partner. While the crash is initially ruled a tragic accident, something’s not adding up: The team wasn’t supposed to be in New York that day, and it’s soon revealed that there was a very large sum of cash that burned up with the plane. The women find themselves thrown together in search of the truth, with new danger and threats unfolding at every turn.

Could a dissatisfied client be seeking revenge? Or were the partners involved in something bigger—something dangerous and deadly? What other secrets were the partners keeping, and how far might people go to ensure they stay hidden? The widows must find the answers in order to protect their inheritance, their families, and their lives.

Please note: This audio contains strong language, distressing situations, and descriptions of violence that some listeners may find upsetting. Discretion is advised. 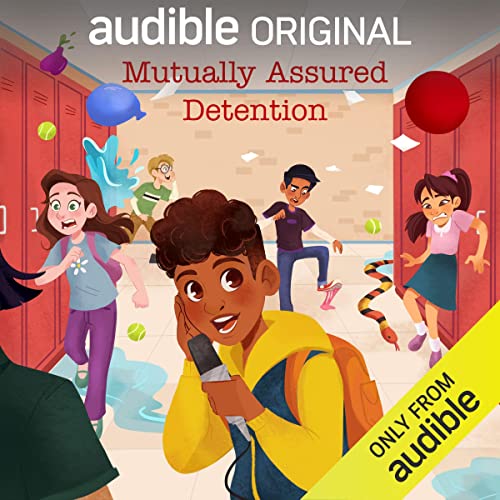 War may be hell, but prank wars are hell-arious.

Seventh-grader Jordan Bryant is desperate for a scoop for his year-end ELA project. When the vice principal gets glitter-bombed in front of the whole class—and the wrong student punished for the prank—Jordan thinks he’s found the perfect story. Instead, he finds himself swept up in the biggest thing to ever hit Murray Middle: The Great Prank War. As the pranks get ever-more epic and insane, so do the punishments handed down by the draconian administration. Can Jordan and his wacky friends figure out who’s responsible for causing the school-wide mayhem without getting into trouble themselves? More importantly: can they stop the madness before the trigger-happy vice principal cancels the dance?

Mutually Assured Detention is a raucous, laugh-out-loud tale of friendship and pandemonium by the author of The Dragon Squisher and Rivals! Frenemies Who Changed the World.

1812. In Bath and London, Jane Austen’s characters are attending balls, and the Bridgerton family are making waves in Regency high society. But these are the grimy streets of Liverpool: a city where the extreme wealth of international commerce meets brothels and brawls, smugglers and secrecy; where both high and low society operate amidst revolutionary rumblings from France and the shadow of the recently abolished slave trade.

When the city’s most powerful shipping dynasty is ripped apart by the sudden death of its patriarch, a fierce battle for power ensues between the remaining members of the Hanley family. Backstabbing, betrayal, long-buried secrets—the Hanleys will use every underhand trick in the book to compete for control of the business and their inheritance. But, as they make and break alliances with each other, the city’s wolves are circling. There are plenty of people ready and waiting to seize power, and to enact their vengeance on the family of John Hanley, whose past crimes can’t stay hidden for much longer…. 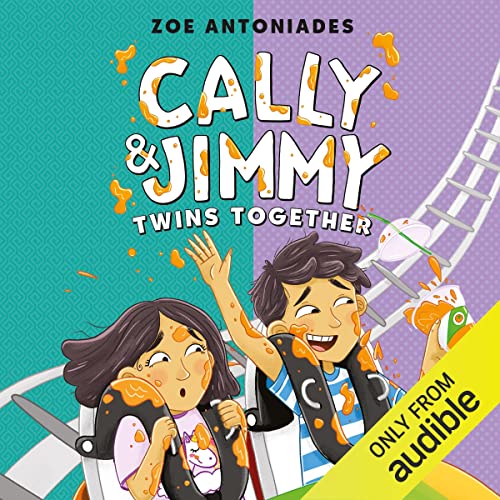 Four fantastic new stories about everyone’s favourite twins. There’s always double trouble when these two are about, so get ready for more mayhem as they look after the school hamster for half term, have a competition to build the best snowman, raise money with a yard sale and have a roller coaster of a time at the local theme park! 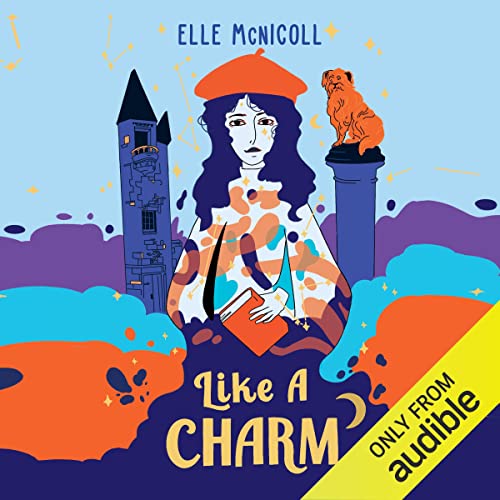 Edinburgh is a city filled with magical creatures. No one can see them…except Ramya Knox.

As she is pulled into her family’s world of secrets and spells, Ramya sets out to discover the truth about the Hidden Folk with only three words of warning from her grandfather: beware the sirens.

Plunged into an adventure that will change everything, Ramya is about to learn that there is more to her powers than she ever imagined. 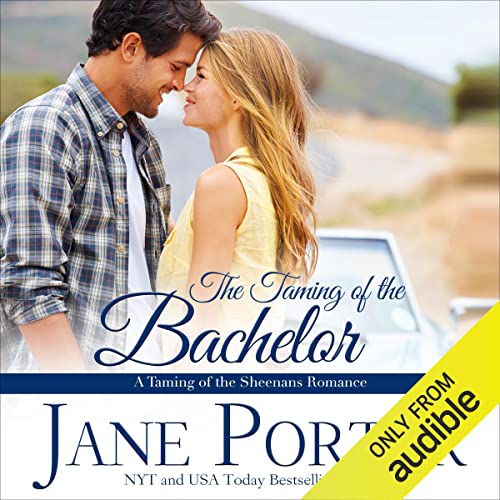 Dillon Sheenan refuses to be tamed…

After three years running the family ranch, sexy thirty-year-old Dillon Sheenan has a one-way plane ticket out of Montana. He’s eager to put small-town life, with its emphasis on brides, babies, and families, behind him, as he’s certainly not interested in being a dad, or even ready to settle down.

Beautiful single mom Paige Joffe juggles a lot, between running Main Street Diner and coping with her money pit of a Victorian on Bramble Lane. She doesn’t have time for anything but taking care of the loves of her life, Addison and Tyler, and working to pay down bills. But one date—and an incredibly hot kiss—with Dillon Sheenan wakes her up and makes her dream again.

Is Dillon about to break the heart of the only woman he’s ever loved?

Media mogul Cormac Sheenan had no desire to become a family man, but his newly-adopted goddaughter Daisy has a way of changing all his rules, including him moving back to Marietta, Montana, where life is simpler and he has family nearby.

Now four, precocious Daisy strikes up an unlikely friendship with Marietta’s seasonal Santa Claus, and believes he’s the real thing, even though Cormac points out to her that this jolly old Kris Kringle is renting a room at Bramble House, not living at the North Pole. Daisy’s not worried; she’s made her Christmas wish for “a new mommy” loud and clear—and she’s got the perfect candidate in mind.

Cormac is livid with ole fake Santa. He’s not at all ready to settle down, and he’s definitely not getting back together with his old flame Whitney Alder, so Santa can stop playing playing the whimsical match-maker…besides, it’d take a miracle to make him fall in love.

Trying to get over a broken heart, twenty-four-year-old teacher Jet Diekerhof takes a gap year to travel and have an adventure. Her practical farming family is horrified until Jet’s older sister Harley gets her a long-term sub position at a one-room schoolhouse in Montana’s Paradise Valley. Jet’s grateful it’s 775 miles from her overly involved family—and the guy who broke her heart. She’s also sworn off men, until meeting darkly handsome Shane Swan changes everything…

Thirty-four-year-old Shane Swan has been an outsider since birth. Being raised by his maternal grandmother near Flathead Lake, Montana, until her death when he was four meant he ended up in foster care. But ever smart, determined, and ambitious, Shane has become one of the most successful writers in America. Yet none of his success has answered the burning question: Why was he the one given away, and his brothers kept? Now Shane has moved to Marietta to unravel the secrets and lies and what it means to be a Sheenan, and nobody is closer to the Sheenans than Brock’s young sister-in-law, Jet.

Normally Shane would never use a woman, but if Jet can connect him with the keys to his past, he doesn’t seem to have choice. Until he begins to fall for her. Can two strangers who were never meant to be believe in love again?