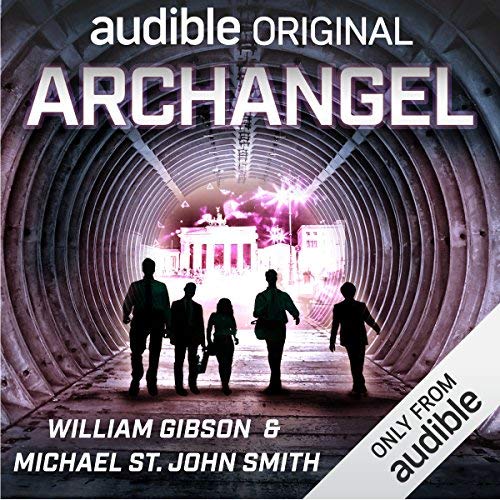 Great Performances All Around

I was about halfway through the book when I looked it up on Goodreads to find out that the original version was a graphic novel.  It makes sense to me (especially given the length of it) but I didn’t once feel confused or feel like something was missing.  Quite the opposite.  Due to the “full-cast” performance with sound effects and everything – this book felt different than my average audiobook.  I don’t listen to many dramatic presentations like this but it was just what I needed.

Short and full of grit – Archangel was a story that I enjoyed from beginning to end. Gibson and St. John Smith tell a story of a world where the President-For-Life is trying to find another world/realm to go back and “fix”. We find out as the story progresses what happened to Baltimore (and then again later what really happened).  And we are introduced to some really cool and interesting tech that our characters are in charge or (or get help from).

The story itself jumped around a little bit, but it translated well to audio.  I thought that the cast did a wonderful job – along with the sound/audio editors.  Every sound effect felt like it belonged without being distracting or overwhelming.  The audio was easy to hear and the background noises made the scenes more realistic instead of stealing their thunder.

Overall, I found myself enjoying Archangel and as I said above – it was the perfect book for the mood that I was in.

The year is 2016. Not our 2016. Theirs. Earth is dying, the result of a worldwide nuclear holocaust caused by America’s dictatorial President-for-Life Lewis Henderson, a man who will use any means necessary to maintain power and survive.

Enter: The Splitter. A machine capable of splitting off an exact replica of Henderson’s world. A world where the cataclysmic events causing its destruction have yet to occur.

That world is ours.

In August of 1945, our postwar Europe becomes the battleground for Henderson’s operatives - led by his sociopathic son - as they engineer a complete redo of their history. By changing ours. Their mission is to take over our world and rule it absolutely - again.

The only obstacles in their way are a disabled rebel colonel in an underground bunker; a Marine pilot who pursues Henderson’s men across time; and a British secret weapons analyst who must accept that the impossible is, in fact, possible.

And that the fate of two worlds hangs in the balance.

The cast of Archangel includes:

Also by this author: Alien III: An Audible Original Drama