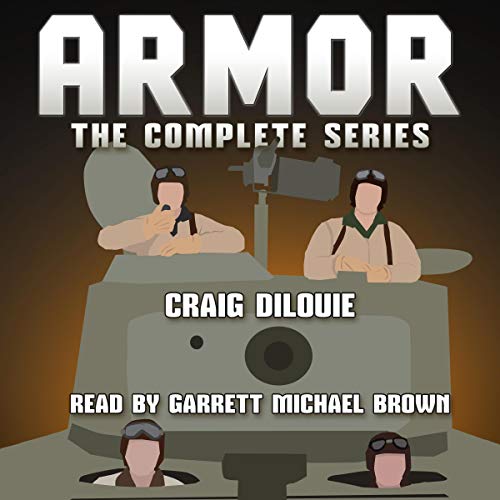 This was one of those sets of books that I knew, going into it, that if it didn’t grab my attention right away that I was going to be in trouble.  At 22 hours, it’s hard to devote that amount of time to any book (though, this is a collection of 5 books).  Thankfully, DiLouie absolutely sucks you in with the historical realism and the action that there was no way that I wasn’t going to enjoy it.

I hate to compare it to anything, but at least with a reference – the movie Fury really helped me see/understand what the inside of an armored tank would be (I”m not sure if it’s the same one or not) but you really get the understanding that these guys are basically on top of each other and that if they don’t get along that things are going to be difficult.

The Armor series is broken up into five books, each one telling a different story about a different campaign. This really broke the book up and allowed it to flow really nicely. Each story had it’s own plot and just own feeling – but the book as a whole felt complete. It’s nice when you’re able to break it up like that but keep the feeling the same.

The narration by Garrett Michael Brown added to an already enjoyable story. He was able to add in effects and just different things that took this from just a narration and slightly into a performance. But, it’s not over done or anything to the point that it brings you out of the story.  He’s able to add stuff in that makes the story better instead of distracting.

Overall, a really enjoyable collection of stories that felt historically accurate and were an absolute blast (pun intended) to read. I’m glad that I was able to read this and I’m glad that I spent the time to savor each story.

ARMOR: The Complete Series chronicles the journey of a tank crew through the Second World War, from North Africa to Berlin. Action-packed, authentic, and filled with flawed but tough men of the Greatest Generation, ARMOR drops you straight into the horror, brotherhood, and triumph of armored warfare.

You’ll fight alongside the crew as they go head-to-head with Tigers at Kasserine Pass, race to Palermo in Sicily, land during the horrific first assault wave at Omaha Beach, crash against the Norman hedgerows, make a stand against Hitler’s last blitzkrieg in the Battle of the Bulge, and batter their way into the heart of Nazi Germany. All the while, you’ll live with the crew in the cramped, noisy, and vulnerable fighting machine that was the American Sherman tank.

ARMOR: The Complete Series puts together for the first time all five episodes in Craig DiLouie’s historical military fiction action & adventure series: The Battle of North Africa, The Fight for Sicily, Fortress Europe, The Bulge, and Reich’s Fall.

Audiobook: The Saboteur by Andrew Gross