Asgard Park: The Summer of 1991 by Ronald Simonar (Narrated by Dennis Heath) 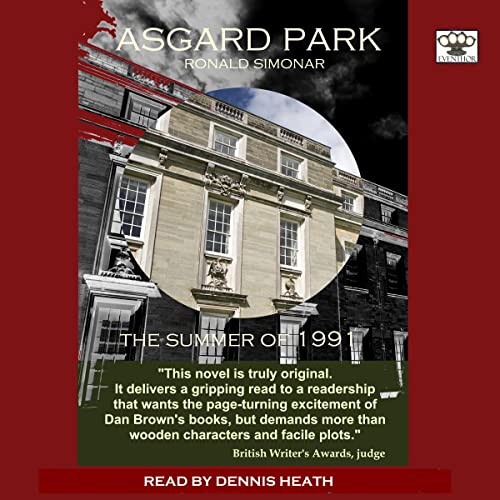 Getting introduced to books I wouldn’t have picked up otherwise might be my favorite part about being a book blogger. Sometimes it’s a story that is excellent that you would have skipped because of a cover or because of something else. In this case, it was a newer author (one I’d never heard of) along with just not knowing much about the story at all until I dove into it a bit.

Doing that really opened up an interesting and unique world that Simonar created. Specifically, his character development in Asgard Park probably the best part of this story. It followed three different people throughout. Early on I wasn’t sure how it was going to come together at all. And as the pieces started to fall into place I was shocked at the similarities and different things that kept “coming up” or clicking together.

Simonar should be darn proud of this book. It’s one of those books that without realizing it, I was more than halfway through it. Then again I was almost done with it. The flow and just the way that I had to find out what was happening page after page (or in my case, minute after minute) was awesome and really had me chomping at the bit to figure out what was going to happen next (or what happened and how it tied together).

Overall, I thought that Asgard Park was a good story that might be overlooked by a lot of people. The cover, while it makes sense when reading it didn’t really draw my eye. Lots of text and at first glance, I couldn’t even tell it was a building. The only other constructive criticism I would give Simonar is that his description of the audiobook is way too short, especially compared to the description of the Kindle edition on Amazon. I think changing that up would really make an already great book stand out in a crowded market. But I say these things because I truly enjoyed the book and want others to read and enjoy it.

Across two continents, three strangers get a glimpse of the best kept secret of our times.

On a rainy day in late June 1991, Dr Wallenberg, a wealthy Swedish neurologist passes through customs at Kennedy Airport. He has come to take over the reins at Asgard Park, an old mental Institution in upstate New York. Here he discovers an irrational conspiracy run by his predecessor who is now a patient, obsessed with Intelligent Design.

We meet a beautiful young widow in Albania, eking out a hardscrabble existence. Her life spirals out of control when grim and mysterious things start to happen.

For a roving troubleshooter of the NSA, the threads of intimate collaboration by worldwide secret services bring him into conflict with a powerful baron of German industry.

The paths of these three strangers meet in Albania when they uncover the oldest story on Earth: the truth about Heimdal: The watchman who settles social order among humans for the gods of Asgard.

The King of Fear: Part One by Drew Chapm