At Your Most Beautiful by Harper Bliss (Narrated by Angela Dawe) 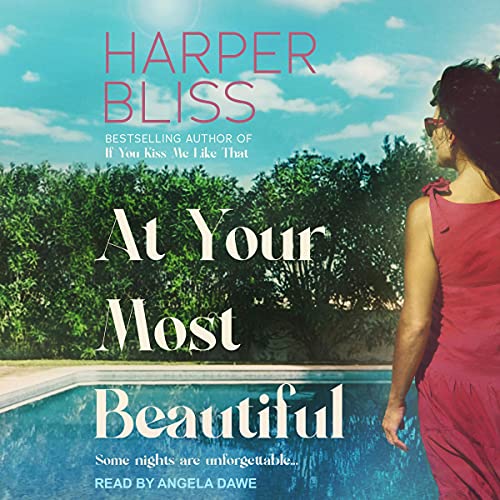 It’s amazing when you read an author you like a few times – you basically start picking their books up blind. That’s exactly what happened with At Your Most Beautiful. I went into it completely blind – not knowing which specific trope it was going to take or what the premise of it was. I saw Harper Bliss and I was in. Diving into it (pun intended) this story was an age-gap story – but it was way more a story about Maya finding herself and figuring out who she really was and wanted to be.

I think that Quinn might be one of the more interested characters in any LesFic book I’ve ever read. I’ve definitely read age-gap romances before, but this was the first time that someone was unabashedly attracted to older women, knew what she wanted, and went after it. A lot of times it’s a surprise attraction, or a fell in love hard and age doesn’t matter. Whereas Quinn was “I’m attracted to older women, that’s when they’re at their most beautiful” type of woman.

What I didn’t expect was a jump in time. I hope that’s not too much of a spoiler, but the opening of the book gets right into it and I thought “how the heck is Bliss going to interject any drama into this”. Well, they jump ahead and end up running into each other again at a later time. Things from there pick up and I thought it was a super interesting mixture of the issues that Maya had to deal with (being the older woman) and similar issues that Quinn had to deal with as well. They seemed to orbit each other but weren’t on the exact same life path. Leave it to Bliss to write a story that had so much growth and so much emotion in it. She had me in tears numerous times as I thought the things that were happening were very realistic but also would have been very painful to the characters involved.

Overall, At Your Most Beautiful was really enjoyable. I flew through it in about 2 days and it made me smile and sob. Angela Dawe was a great choice for this and voiced both women exactly how I would have pictured them in my head. I love it when a narrator can nail that image – it’s harder to do than you might think.

Some nights are unforgettable…

Ten years ago, Quinn Hathaway and Maya Mercer shared a night of forbidden passion they vowed to keep secret forever.

When Quinn and Maya meet again, old sparks fly, but none of the reasons to hide their passion have changed. Quinn is still much younger and Maya has never told her son that she’s attracted to women.

Can Maya overcome her fear of what her family might think of her? And how will Quinn’s parents, who used to be Maya’s next-door neighbors, react to their daughter’s unconventional love affair?

Best-selling lesbian romance author Harper Bliss brings you a second-chance age-gap story about not being afraid of living life on your own terms.

At Your Most Beautiful by Harper Bliss
Narrator: Angela Dawe
Length: 7 hrs and 35 mins
Published by Tantor Audio on September 14th 2021
Genres: Age Gap
Format: Audiobook
Buy From Amazon
Buy from Audible
Also by this author: More Than Words, Next In Line For Love, Two Hearts Alone

Next In Line For Love by Harper Bliss (N