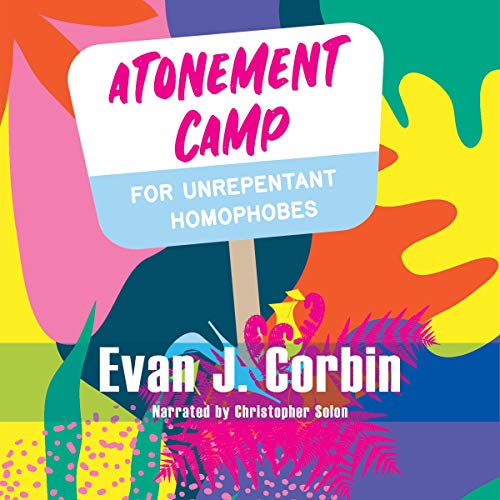 A Story About Loving Yourself

The title of this book doesn’t not give a lot away, and I was honestly hesitant at first because I couldn’t tell which side of the debate it was going to be on. Thankfully I read the synopsis and had a slightly better feeling, but once I dug into other reviews for it, I quickly realized that this book was going to be up my alley.

Atonement Camp is one of those books that when you start it, even what I said above feels like it goes out the windows. The first almost quarter of the book shows exactly who Rick is or at least who Rick is trying to convince himself that he is. Then we’re treated to some flashback scenes that flip everything on its head. Once we get into more of Rick’s backstory, it’s not that you start to like him, but I started to stop disliking him some. It wasn’t until almost the end of the book, once (trying not to spoil) things actually change in his life, that he’s a likeable character that you realize was living a life that wasn’t really his choosing (maybe a slight spoiler, sorry!).

I will say that this book was great. It was funny, interesting, and most of all tells a story about loving who you truly are. No matter what that costs. But more than that it was also a little bit of a thriller book as well, with scenes that had me guessing who was infiltrating the Atonement Camp and who certain people worked for and why. It was a really interesting mix of a story and one that I won’t forget for some time.

Overall, an enjoyable story that I flew though in about two days. A story of love, specifically about learning to love yourself. Something that we all need to be reminded of from time to time.

The oldest translation of a gospel is returned to the world by a secret society long dedicated to its preservation. In it, Jesus explicitly condemns bigotry and homophobia. In a new world in which LGBTQ passengers receive preferential boarding for flights and the United States has elected its first lesbian president, Pastor Rick Harris is stalwart, closeted preacher who doggedly holds on to his increasingly unpopular convictions.

When an incendiary sermon goes too far and offends an influential family, Rick makes a painful choice to keep his job: He attends an atonement camp run by drag queens for society’s most unrepentant and terminally incurable homophobes.

Atonement Camp is immersion therapy for Pastor Harris, and it might be working. An open bar with pedicures, a devastatingly attractive roommate, and an endless supply of glitter help him manage to make new friends. Soon, Rick and his cohorts learn the camp may hold its own secrets. Amid the smiling faces and scantily clad pool boys who staff the camp, a clandestine group plots to discredit the New Revelation and everything it stands for.

If Rick has the conviction to confront his own hypocrisy, he might be able to uncover the conspirators with help from his adopted flock – and find new truths within himself.