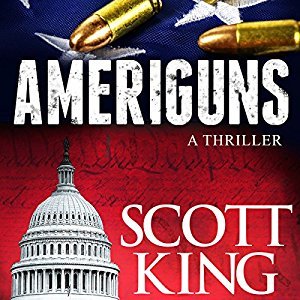 The first thing that I noticed about Ameriguns was that its protagonist, Nathaniel Ryder, was not your typical one.  He’s black, gay, and… without ruining too much, recovering from a leg injury.  He’s also an FBI agent who has lost almost everything.  You would think he would be a “nothing left to lose” kind of guy, but he really wasn’t, he had a cool demeanor about him that made me feel like everything was going to be alright.

Ameriguns was one of those books that will really stick with me.  The realism in it had me genuinely worried that something like this would happen.  And the outcomes of everything (especially the political ones) really scared me, because I can, without a doubt in my mind see them coming true the way that King wrote.

This is the first book I’ve read written by Scott King, but I will be back.  I hope that we see more of Ryder too.  I really enjoyed his point of view.

After surviving a mass shooting, FBI Agent Nathaniel Ryder is forced to confront his worst fears as Ameriguns, a group of lone-wolf gunmen, put Washington D.C. under siege. When Ryder's superiors suspect him of orchestrating the terror, he must go on the run, unable to trust his co-workers or friends. Only he can clear his name and put an end to the killings. 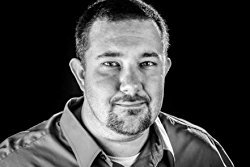 Scott King was born in Washington D.C. and raised in Ocean City, Maryland. He received his undergraduate degree in film from Towson University, and his M.F.A. in film from American University.

“DAD! A Documentary Graphic Novel,” King’s first book was published in Fall ’09. He is also the creator and writer of “Holiday Wars.”

Until moving to Texas, to follow his wife’s career, King worked as college professor teaching photography, digital arts, and writing related classes. He now works full time as a photographer and author.