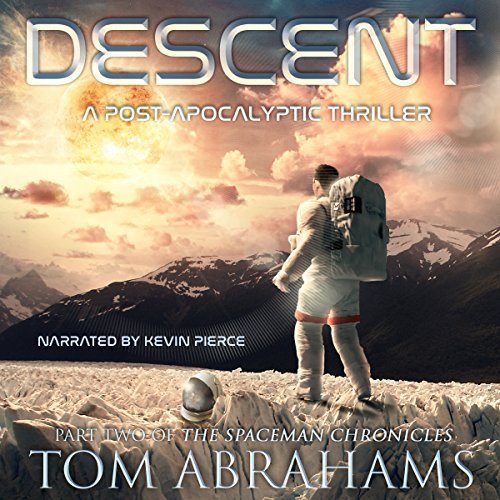 The first book in this series was my top audiobook of 2016.  It just felt so much different than all of the other post-apocalyptic books I’d read (and I read a lot of them).  The space aspect was a new one that I’d honestly never considered — mostly because the reason for the apocalypse in other books relate to something happening on Earth caused by us.  This wasn’t your typical everyday run-of-the-mill EMP.  It was a CME Coronal Mass Ejection that causes all of the power to go out.

After crash-landing on Earth — Clayton has to find out where he is and is instantly thrown into surviving.  Clayton’s wife and child are back home, also trying to adjust to this new way of living.  The story flips between them and a few other characters.  Some bad guys and some government people who are setting the stage for book 3.

I was really worried about this book because of how much I enjoyed the first one.  I rarely ever get that tingly sensation from a book — so Descent had a lot to live up to.  I knew that Abrahams couldn’t continue to write about space and Clayton’s struggle aboard the failing ISS. So, with that in my head, I dove into this head first hoping not to smack my head on the bottom.

I didn’t, and this book was just as enjoyable as the first one.  The action has moved from space down to Earth, but Clayton is in an almost as inhospitable place as before and has to find his way to safety before he can even consider heading home.

Abrahams sprinkles a lot of different things in this book that if I were to list here would make it sound completely disjointed and unorganized — but he makes it work.  He was able to weave these separate stories into one cohesive unit, making Descent an enjoyable post-apocalyptic thriller.

PA fans will find a lot of elements that they are used to in this, and a few that they aren’t (I think). Abrahams is one of the best writers in this genre, and I will continue to buy his post-apocalyptic stories if he continues to weave stories like this one.

The saddest part of my review is that I basically can’t write any details about this book without spoiling things.   There were a lot of parts that I wanted to bring up while writing this, and I knew it would either spoil the first story a little or definitely spoil some of the surprises in this one.

Kevin Pierce voiced SpaceMan and is back for Descent.  Providing the perfect voice for the main character and the perfect tone for this novel is just part of a Kevin Pierce narration.

Overall, Descent wasn’t jaw-dropping amazing like SpaceMan, but it weaves a great post-apocalyptic story that you’ll be upset if you miss.

Clayton Shepard is lost, cold, alone, and determined to find his way home.

But he's landed on a planet he doesn't recognize. Earth isn't the same place he left months earlier.

There is little light, no heat, and limited communication.

As he works to find his way back to his family, they cope with the struggles of a new reality and a quickly devolving society.

What none of them know is that the radioactive blast that plunged their lives into darkness was only the first one.

More is on the way.

Tom has traveled places most people would avoid.

He’s braved the stinging winds of a category four hurricane as it pounded The Gulf of Mexico, living and working without power for days.

He’s picked his way through the Amazon jungle, trekked across the irradiated exclusion zone of Chernobyl, Ukraine, and climbed the crumbling, high-altitude stone steps leading from the barrio Tacubaya, Miguel Hildalgo, in Mexico City.

He’s been evacuated in an ambulance from the barren Badlands of western Canada.

Tom is a veteran television journalist and author who’s spent the last 20-plus years telling the biggest stories of our time.

He’s reported from the East Room of White House and Capitol Hill, interviewed Presidents and presidential candidates, and was at the Pentagon while smoke still rose in the hours after 9/11.

Audiobook: No Man’s Land by Jacque

This Would Be Paradise by N.D. Iverson (