Audiobook: Rise of the Dead by Jeremy Dyson (Narrated by John Crosthwaite) 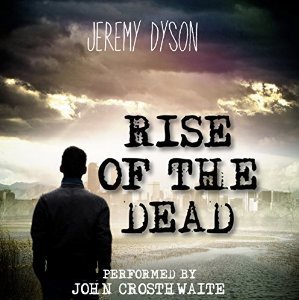 Blake never really took chances.  Knowing probabilities and numbers made him like this.  But, when cars start crashing around him and people seem to be shambling towards him like zombies he quickly realizes that he has to make life or death decisions. As he continues throughout the changing world he comes across others who he tries to help find safety. Rise of the Dead chronicles the first moments of a zombie apocalypse from the eyes of the unlikely survivors.

The narration is done by John Crosthwaite and he does a really nice job.  I wasn’t sure how I was going to feel about it at first (especially because the Audible preview does NOT do his narration justice).  Also, because I couldn’t tell if he was going to be doing a “radio”/overacting performance, but he really splits the line between over-acting and “Buehler!” monotone which absolutely kills audiobooks.  Crosthwaite also has one of those voices that’s really easy to understand at almost any speed for those of you who like to speed up audiobooks (I do it too!) After I finished this book I went over to Audible to see what other books that Crosthwaite narrated and was honestly astonished that this was his first audiobook.  Kudos Mr. Crosthwaite, kudos on a job well done.

My title says that this is Romero zombie fiction that’s done right, and it really is. Romero would be proud.  Dyson takes a genre that is pretty over-used and is able to take it back to its roots.  There are zombies, we’re not sure why but they are walking and they want all survivors to join them in their zombie lives.

The story is really easy to follow with the main character who is the definition of the underdog.  He’s a smart guy who is a statistician by day but didn’t see this coming (which he laughs about).  He is the least likely to survive but shows incredible courage and strength as he faces enemies and zombies at every turn.  It’s always fun rooting for the underdog and Dyson even gives readers chances to dislike Blake from time to time which really amps up the drama and suspense.

Overall, I really enjoyed this book.  It was a nice change of pace for me too.  Normally with a zombie book, the author or description touts how “a mysterious virus has taken over” which makes me want to know more about the virus.  This book just felt like “oh, crap there’s zombies and we’re not safe.”

Rise of the Dead is a zombie novel with a lot of guts that aims for the brain, blending literary fiction with post-apocalyptic thrills.

Blake was never one for taking chances. He lived in a world of formulas and equations. A statistician in a controlled society where everything had become predictably mundane. That world disappeared the day the dead got up and began attacking the living.

Now, the end is here. Blake finds himself fighting for his life in a world that is rapidly spiraling out of control. He struggles to keep himself alive and must risk everything to find his family.

Along the way, Blake finds himself thrust among other unlikely survivors. Together they must adapt to the realities of the undead world, or join the legion of zombies. The characters must overcome their conditioned human apathy and come together if they have any chance of survival.

Rise of the Dead chronicles the first moments of the zombie apocalypse. While the story is a fast-paced thrill ride through an ever-growing zombie horde, the novel aims to draw upon familiar themes as those found in the Romero classic films. Jeremy Dyson is a fiction author, and Rise of the Dead is his first novel. He has worked for several years as a freelance copywriter, as well as a number of odd jobs that have helped him get by and have motivated him to focus on his fiction.

He attended the University of Iowa where he majored in English and owes many thanks to the many talented writers around Iowa City. He currently resides in Chicago, Illinois with his two adorable daughters and his loving, supportive wife. His family is what inspires him to write and motivate him to work harder each day.

Rise of the Dead was inspired by his love for the zombie genre. His writing influences are J.D. Salinger, Cormac McCarthy, Ernest Hemingway, Raymond Carver and George Romero. He is currently at work on a sequel to Rise of the Dead, a book of short stories, and a work of literary fiction.