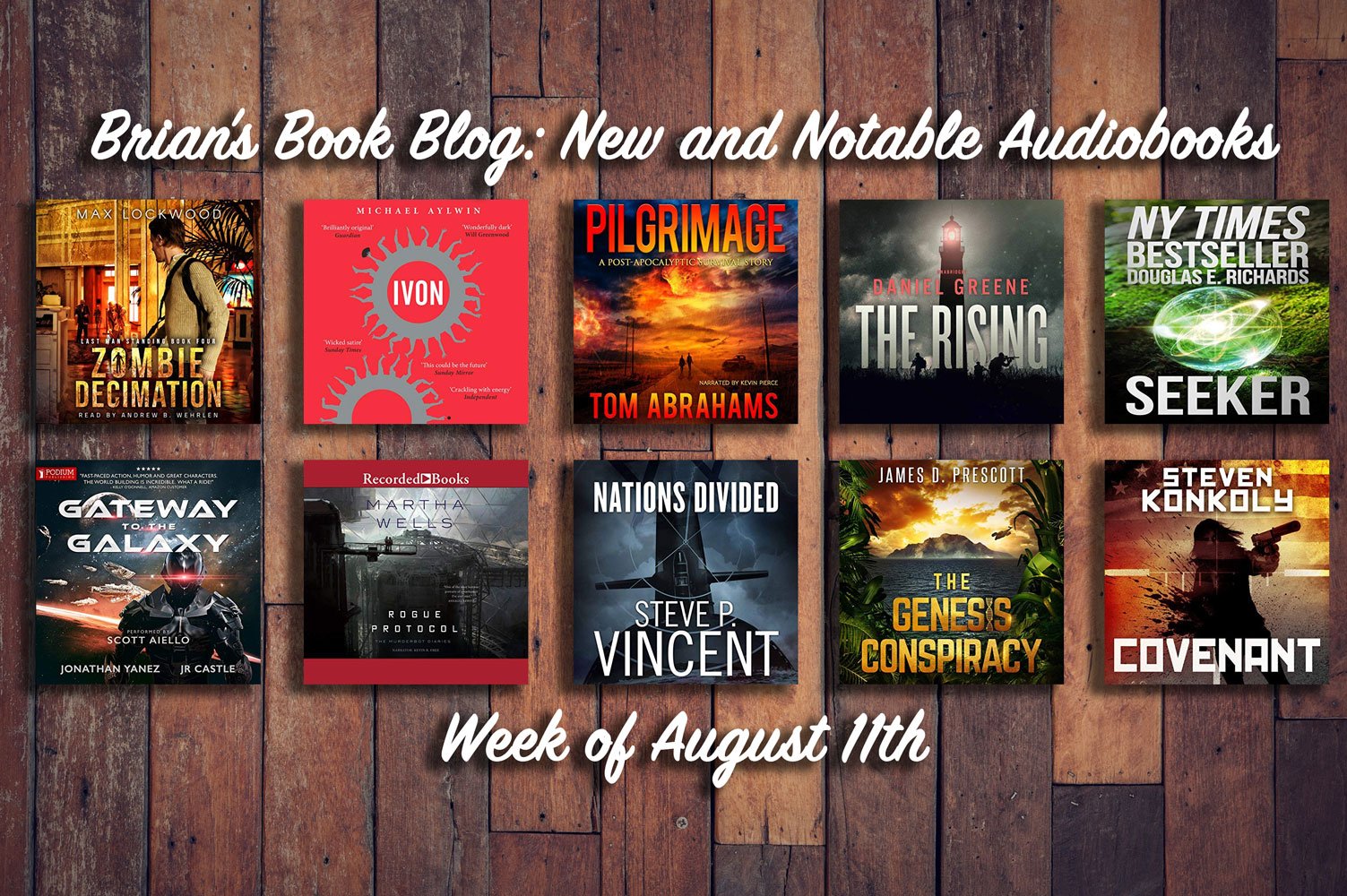 Welcome to Brian’s Book Blog’s weekly New and Notable Post for the Week of August 11th.  We share the 10 books from this week that caught our eye featuring Post-Apocalyptic, Horror, Sci-Fi, Thrillers, and more. Enjoy!

Zombie Decimation by Max Lockwood
Narrated by Andrew B. Wehrlen
Self Published

When the world changes, sacrifice is sometimes the only option.

While Genevieve and Ellie work to find a cure for the virus, a simple supply run turns into a horrifying experience and one of the team members is lost. But in sacrifice, there is hope; while their work has been slowed by the tragedy, they’ve learned something new about the zombie hordes.

Matthew’s own contribution to the survival of his friends is about to be tested as he gathers information that could help Genevieve and Ellie get their research back on track. The clock is ticking, and Matthew can’t be sure if they’ll find the cure in time, or what will be left of them if they can’t find a cure.

Zombie Decimation is book 3 of the Last Man Standing series. 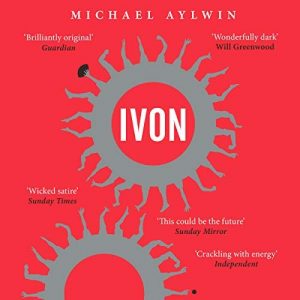 The year is 2144, and the world is powered by sports – politically and practically. Each community owes its prosperity, or otherwise, to the success of its teams and athletes. A person’s class is determined by their aptitude for sports. Once their useful life as an athlete has expired, they are placed in stasis at an age predetermined by that class. But not in Wales.

Separated from the rest of the world by a huge wall, the Welsh still play games for joy. They play, they carouse, they love, and they die. They have fun. Of all the Welsh, the greatest sportsman is an unreconstructed genius named Ivon.

When the chance arises to become the first Welshman to cross the great divide into England, he cannot resist. His parents, who were exiled from England before he was born, know what London will do to him. They are desperate to have him back. But London will not give up an asset like Ivon so easily.

Ivon is a celebration of where sports has come from and a satire on where it is going. 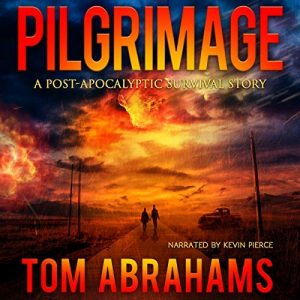 A FAMILY VACATION. AN EXPLOSIVE DISASTER. A DESPERATE STRUGGLE TO GET HOME.

Pilgrimage is a stand-alone post-apocalyptic story of survival. It was previously published as three separate novellas: Crossing, Refuge, and Advent.

High School teacher James Rockwell is vacationing in Maine with his family, when an earth-changing explosion sends them on a race for their lives. Their first step is escaping an island in the midst of a tsunami, and it only gets more dangerous from there.

Can they find their way home as civilization crumbles around them? And if they do, what horrors will they find?

It’s a bullet-train of a thriller riding on the edge of the rails to the last page. 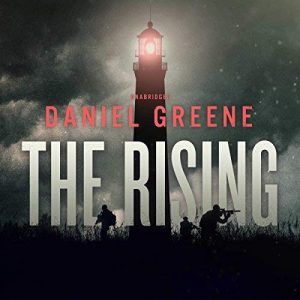 You either build your world or you burn in someone else’s. With every fleeting moment, the whole world draws closer to being overcome by the deadliest virus known to man.

Steele’s family home lies in burnt ruins on the shore of Lake Michigan. His group hunts for his missing mother in the apocalyptic wilderness filled with the dead. Instead he finds a group of refugees badly in need of his skills learned in the shadow war on terror, for they are persecuted at every step by the Chosen, a group of fanatics hell-bent on creating God’s Kingdom in the rubble of society.

Dr. Joseph Jackowski finds himself in a dangerous battle against both the deadly virus and the clock inside the bowels of the Cheyenne Mountain Complex. His team struggles as their own members fall victim to the virus in a race to discover a vaccine.

Colonel Kinnick rushes his paltry forces into the rocky passes of Colorado to hold the dead off long enough for a vaccine to be found. If he fails, the Vice President will burn the entire Western Seaboard into the blazing inferno of a nuclear holocaust. Who will rise? The Living or the Dead?

Listen to the series that listeners are calling, “An epic, fast-paced adventure, featuring a diverse cast of characters, non-stop action, and of course, zombies – this apocalyptic thriller is a sure victory….”

In the epic third installment of the End Time Saga, Daniel Greene brings the brutalized remainders of humanity even closer to the edge of defeat.

A breathtaking near-future thriller. From the New York Times best-selling author whose books have been downloaded more than a million times.

A small alien spacecraft with extraordinary secrets. A mad scramble to get to it first.

When an interstellar probe lands in the heart of the Amazon jungle, powerful nations around the world will stop at nothing to retrieve it. Because the unoccupied alien craft is sure to contain revolutionary technology. Technology that will allow the country that controls it to dominate the globe.

With the probe hidden within the densest rain forest on Earth, traditional military power is useless. So the US chooses to send in a single operative, a man who’s been enhanced to the limits of current technology. He’ll be greatly outnumbered, and with so much on the line, not even the closest of allies can be trusted.

But the true stakes are higher than anyone could possibly know. Because all is not what it seems, and the alien spacecraft has plans of its own….

Seeker is a fast-paced roller-coaster ride of a thriller; one that explores actual human enhancements being worked on today, along with mind-blowing concepts listeners will be pondering long after they’ve heard the final words.

While the universe was still young, vambraces were forged, giving their users extraordinary abilities. A brutal war was won through the blood and sacrifice of patriots. Soon, the vambraces faded to legend.

Now, Frank and Marine Space Corps-1 find themselves across the galaxy, where an ancient evil is growing. From exploratory crew to the front of enemy lines, Frank will have to decide whether to play the part of hero or to be the Marine needed to win the war.

Because the victor takes the universe.

The vambraces will be found again. A new order of knights will be chosen. And once again light will do battle with darkness.

Includes a special bonus note from the authors.

The third thrilling book in the increasingly popular Murderbot Diaries, which began with All Systems Red.

Sci-fi’s favorite antisocial AI is back on a mission. The case against the too-big-to-fail GrayCris Corporation is floundering, and more importantly, authorities are beginning to ask more questions about where Dr. Mensah’s SecUnit is.

And Murderbot would rather those questions went away. For good.

Martha Wells’ Rogue Protocol is the third in the Murderbot Diaries series, starring a humanlike android who keeps getting sucked back into adventure after adventure, though it just wants to be left alone, away from humanity and small talk.

Peace has been decades in the making, but chaos is just the press of a button away?

Jack Emery is happier than he has been in a long time. Nobody has shot at him or tried to blow him up for years, and he’s learned to love the job he thought he’d hate: Special Advisor to the President of the United States?

But nothing can prepare Jack for the work to come. As America continues to heal from self-inflicted wounds, an ambitious President McGhinnist draws closer to achieving the impossible: peace between Israelis and Palestinians?

As the countdown to peace reaches zero, a desperate group of hardline Israelis invoke the Samson Option, a secret protocol that will eradicate the peace agreement and pave the way for the destruction of America and the Middle East?

Jack has learned the hard way that when a crisis knocks, you don’t always get the chance to ignore it. 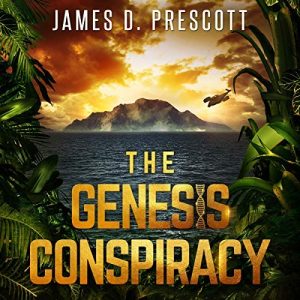 The Genesis Conspiracy by James D. Prescott
Narrated by Gary Tiedemann
Self Published

The secret behind human evolution is about to be revealed…but will it come in time?

For over a decade, archaeologist Dr. Martin Anders has searched in vain for proof of the fabled continent of Atlantis. After raising a puzzling artifact from the ocean floor, Anders gets more than he bargained for. It is a piece of modern technology thousands of years old.

When a deadly global pandemic threatens the human race with extinction, Anders fails to see how it may be connected to his startling new discovery. That is until he’s approached by a powerful biotech company. They’re assembling a team of scientists and Special Forces operators to retrieve the cure from their top secret research facility. It will mean traveling to a dangerous land populated by creatures long extinct and facing off against an ancient order determined to keep its secrets at any cost.

A fast-paced archaeological thriller that will make you question everything you think you know. For fans of James Rollins, A. G. Riddle, and Preston & Child. 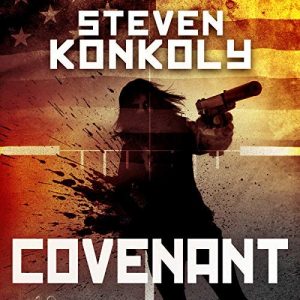 “The tree of liberty must be refreshed at every opportunity…with the blood of our enemies.” – General Terence Sanderson, USA, Retired (Head of the Black Flagged program)

At a luxury resort on the coast of Uruguay, Jessica Petrovich and a select team of Black Flagged operatives prepare to kill Dr. Anatoly Reznikov, the elusive bioweapons scientist responsible for designing and selling a lethal virus to America’s enemies. At the same time, a Mossad assassination cell moves on a Russian mafiya boss believed to have offered Reznikov’s bioweapons to the Iranians.

There’s only one problem – both targets are located in the same hotel suite, and neither team knows the other is coming!

Covenant takes place between the fourth and fifth books of the Black Flagged series.