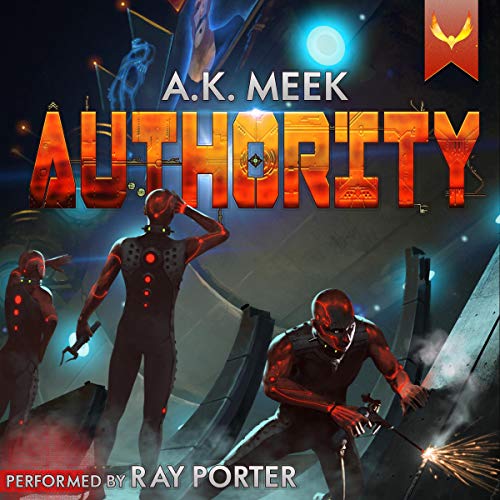 I’ve been jumping into books sight unseen more than I usually do.  I only “judge” them by their cover. I like seeing if the cover matches the story at all (or gives me the right “vibe“). This one gave me a little bit of what the story was going to be about – but at first glance it looks a little bit like aliens (the red hue) (which is ironic due to a major plot point I didn’t see coming). What I didn’t expect was basically three different and distinct stories.

The first story is of the invasion – that one totally surprised me.  I’m sure if I’d read the synopsis I wouldn’t have been as thrown off by this.  But the beginning of the story sets the entire story up as a dystopian future.  We don’t really learn too much about the main dystopian-like “Authority” as much – but we do know of them.

The second story is one of learning new things, both about the world and yourself.  This story featured one of the few main characters (the son of the inventor of the main technology being used in the story). His story arc was (maybe a slight spoiler, sorry) – was a bit shorter than I expected.  I actually thought it was a gutsy move.

The final story was one of what to do with new found freedoms.  It has a nice back and forth of different viewpoints and allows for some really interesting introspective looks as well. It’s really hard to write about the final section of the book because it’s all one big spoiler, but know that you’re in for an interesting sprint to the finish.

Now, saying all of that – it’s not like it’s three distinct short stories or anything. It is one main book, but these three different parts all fit into the larger arc of the story pretty nicely.

I don’t always read reviews before writing mine, but this one I was up in the air about a few things and wanted to see what others thought.  The main points that I saw from others was that they didn’t seem to like that it was a really interesting beginning and then fell a bit short at the end.  I disagree with this, mainly due to the fact that I was able to pick out three distinct stories (that all form one major story arc).  Where the first and second story, as mentioned above) were a really interesting dystopian introduction – the final stretch of the book was sort of a revenge story meets a “what does it mean to be alive” narrative. I thought it was really well done and brought home the message of the entire book.

Well, if you’ve made it this far I’ll reward you a bit.  Authority reminded me a bit of old school dystopians like 1984 and especially Brave New World.  But it also had the feel of a few other newer sci-fi stories.  Especially, The Island (in my opinion Michael Bay’s best movie) and a little bit of some others that I cannot, at the moment, nail down. It was an interesting book that I really enjoyed.  One that I felt like was going to lose its way a few times – only to come back stronger.

The aliens came. We won, but billions died. Now, it’s time to rebuild.

The neons do as they’re told. Chemically bound to their masters by the experimental chemi-chip implant created from alien technology, they are genetically engineered at rapid rates to be servants for the survivors of the war against alien invaders. Without neons, reconstruction would be impossible.

Colin Hanston – the unremarkable son of the genius who invented the chemi-chip – leads a simple life as a farmer, helping feed his district as any good citizen should. But when he redeems his voucher for a neon servant of his own named Michael, everything changes. His father’s old friend-turned-rebel shows up, and Colin learns that not everyone believes the neons are a simple commodity used by the Authority to fix the world and help prepare in case the aliens return.

Knowing he could be killed just for talking to the rebels, Colin will have to decide for himself whether his father’s work is truly a benefit to humanity as his leaders claim, or a perversion.

Is the truth worth destroying his father’s legacy and putting his family in danger? Is it worth dying for?