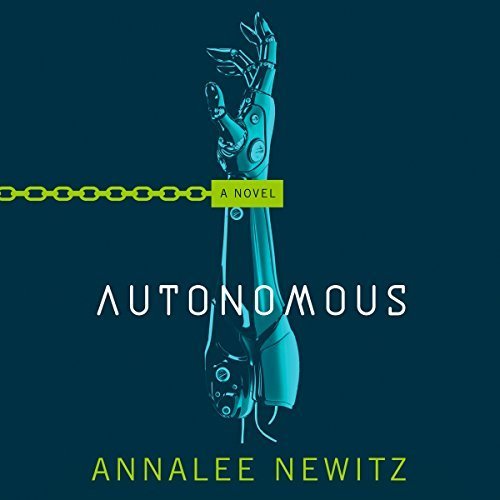 It’s true.  I’m sure that some of my followers will say that I’m too nice and that I give every book and four and a five star rating. But sometimes a book just rubs me the wrong way for one reason or another.  Sometimes I can pin it on something going on in my life and other times its just the way that the author writes (and only once it’s been the narrators fault).

Autonomous was one of those books for me.  I just couldn’t get into it.  I don’t know if there was a real compelling reason to fall for the main character, but I couldn’t find one that kept me interested. I think it was a combination of the world that was created (I felt like I was thrown into a book two) and the people in it.

The science and math in it were intriguing but sometimes a little too much. I’m not sure if this is sold as “hard science fiction” but I might qualify it as that. There were things that were explained that I found myself saying, “but why?” I just couldn’t figure out why they were included.

The time in between action and adventure felt a little too long too.  I don’t need it to be Michael Bay explosions every 5 seconds, but sometimes I need a little reason to keep reading on.  Suspense can be great when timed correctly.  Sometimes it can go on to long and goes into what I always call the “Steven King” effect.  Long for the sake of being long.  This had some of those flaws. Some reader will love the long and drawn out scientific and technological descriptions and long winded reasons for doing certain things, but it’s just not my cup of tea.

Overall, I wanted to like this book, I really did.  But it just fell short for me.  Maybe I’ll pick it up in a year and love it.  Who knows?

The highly anticipated science fiction debut from the founder of io9!Earth, 2144. Jack is an anti-patent scientist turned drug pirate, traversing the world in a submarine as a pharmaceutical Robin Hood, fabricating cheap scrips for poor people who cant otherwise afford them. But her latest drug hack has left a trail of lethal overdoses as people become addicted to their work, doing repetitive tasks until they become unsafe or insane.Hot on her trail, an unlikely pair: Eliasz, a brooding military agent, and his robotic partner, Paladin. As they race to stop information about the sinister origins of Jacks drug from getting out, they begin to form an uncommonly close bond that neither of them fully understand.And underlying it all is one fundamental question: Is freedom possible in a culture where everything, even people, can be owned?

Annalee Newitz is an American journalist, editor, and author of both fiction and nonfiction. She is the recipient of a Knight Science Journalism Fellowship from MIT, and has written for Popular Science, Wired, and the San Francisco Bay Guardian. She also founded the science fiction website io9 and served as Editor-in-Chief from 2008–2015, and subsequently edited Gizmodo. As of 2016, she is Tech Culture Editor at the technology site Ars Technica. Autonomous is Annalee’s first novel.

One thought on “Autonomous by Annalee Newitz (Narrated by Jennifer Ikeda)”