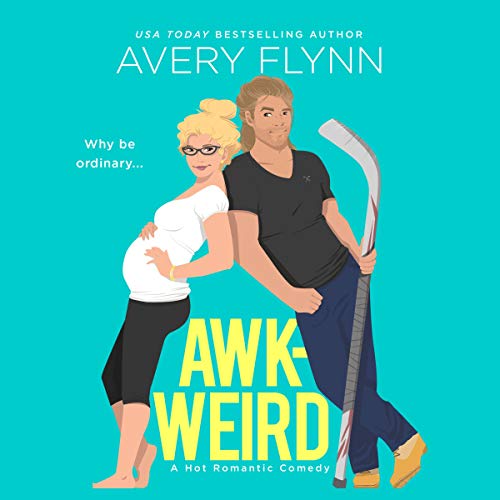 Years ago I had someone who worked in the audiobook industry email me and say that people don’t pick a book because of the narrator. How wrong where they? I picked this book up because Kelsey Navarro narrated it (and honestly I was just as curious about Tim Paige since I’ve heard nothing but good things about him). And I’m glad I did. Awk-Weird was an adorable and sexy story that I enjoyed from beginning to end.

The story revolves around a florist who is awkward in public, around people she doesn’t know, and especially when she feels embarrassed or insecure. When these things happen, she just spouts off random facts about something. Sometimes they’re wildly inappropriate and other times they just make people feel weird. Enter the hockey player. Player two has entered the game.  At a wedding, she hears a table of hockey players playing a trivia game and decides to play along (from her table).  They see what she’s doing and invite her over to join the game.  A few hours later the awkward wedding fling is over. Or is it?

The rest of the story follows the hilarious interaction between Tess and Cole as they both figure out what their new normal is.  Was Cole a huge jerk for most of the book? Yes, but was it so bad that it wasn’t redeemable in the end? I didn’t think so. Was Tess a little hard to live with from time to time… sure! But, it sure made for a cute and funny book.

I especially liked the fact-blurting parts. They were always so random and I’ve known people that are like that – and I can be like that from time to time as well.

Overall, a really enjoyable book that I think absolutely shined as an audiobook. I’m glad that I picked this one up and I hope to read more books like this in the future.

One night and my life completely jumped the tracks. Actually, a pack of expired condoms did that – the rest of the night was pretty amazing. Open bar at a friend’s wedding. Bad dancing all around. Stupid trivia bets with my fellow Ice Knights hockey teammates. And Tess Gardner. The factoid-blurting, fandom-T-shirt-wearing, no-I-don’t-want-a-relationship-with-you woman makes me forget for one night that I’m a man with a routine and my future all mapped out. Still, it sucked she left our room without giving me her number.

Fast-forward to when she tracks me down and tells me I’m going to be a daddy. Jaw, meet floor. Now I’ve insisted that she and our little peach pit move in with me after her apartment floods. She agrees as long as there’s no funny business, no shotgun weddings, and no more nights spent naked together. Sounds easy enough. I was prepared for the late-night runs for more pickles and peanut butter, but I wasn’t prepared for Tess. She’s like a glitter rainbow sparkling in the middle of my all-neutrals house, messing up my rigid schedule and turning my world upside down. What the hell do we do next?