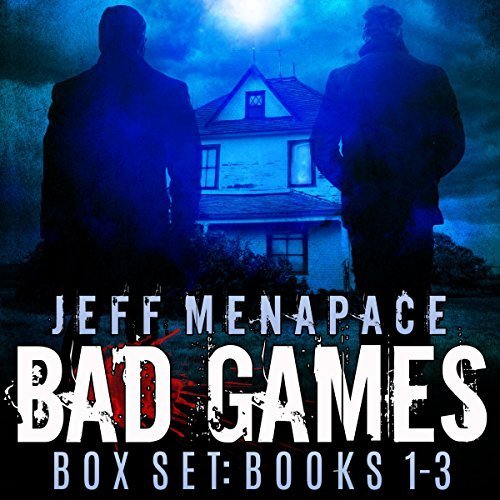 In Bad Games, book 1, the Lambert Family are heading for a nice, quiet, relaxing weekend in a cabin at Crescent Lake. Unbeknownst to them, along the way, they have attracted the attention of the Fannelli brothers. The brothers have included the family in one of their sick and twisted games. The family is being harassed and terrorized until the brothers decide the game has run its course. The outcome of the games is usually death!

In Vengeful Games, book 2, the Lambert family barely survived, but they showed the brothers that they messed with the wrong family. But family sticks together, and when strange and deadly things start happening to the Lamberts again they ask their close friend Domino Taylor for help and they quickly realize that the Fannelli brothers had a family, and that family is bent on revenge.

In Bad Games: Hellbent, book 3, it’s been a year and Domino is still protecting the Lamberts. Racked with guilt over a certain death, he is intent on keeping the family safe, but when someone from Dominos past asks for his help, he knows he has to say goodbye to the family. But someone else from his past is there to play one last game.

This series was amazing. This was pretty much a nonstop psychological thrill the whole way through. What the family went through was horrible but I loved how the couple came together and did whatever they needed to do to help each other. Book 1 and 2 centers on the family and it was heartbreaking seeing what they went through, in both of the books. I was on the edge of my seat throughout!!

The brothers were absolute psychos! They think they are special because experts say that it’s genetics that plays a big role in how someone turns out, but the brothers were raised in a loving home. They think they are the exception to the rule and will be famous and studied when they are eventually caught. Not that they want to be caught, they enjoy the torture too much and love what they do! But from an early age, the brothers loved inflicting harm on others and notched their first kill at an early age. They were the worst of the worst. But in book 2 we are introduced to two more of the family and they were even worse!! It is definitely a family affair.

In all, a terrifying and thrilling read. All three books kept me on the edge of my seat throughout. What both the family and Domino went through was terrifying and disturbing, but seeing their strength was amazing. The author has created some sick and twisted characters, but ones that will stay with me. I highly recommend this series!!

This isn’t the first book narrated by Gary Tiedemann that I’ve listened to and it won’t be my last. He really brought the story to life in this one!! His inflections and tones were perfect for the book and kept me on the edge of my seat throughout.

Bad Games - the terrifying best seller that started it all. The Lambert Family is heading to Crescent Lake, a rural cabin community in Western Pennsylvania, for an idyllic weekend getaway. Some fishing, some barbecue, some games... The Fannelli brothers are heading to Crescent Lake, too. Some stalking, some kidnapping, some murder, definitely some games...though not necessarily the type of games the Lamberts had in mind. But it doesn't matter. The Lamberts are going to play whether they like it or not.

Bad Games: Hellbent - a year has passed. Marine and security specialist Domino Taylor shadows the Lambert family, the guilt he feels for the tragic events that unfolded in Western Pennsylvania haunting him without mercy. When someone from Domino's past contacts him, begging for his help, Domino reluctantly agrees, not knowing the sinister truth lying in wait: There is one final game yet to play.

A native of the Philadelphia area, Jeff has published multiple works in both fiction and non-fiction. In 2011 he was the recipient of the Red Adept Reviews Indie Award for Horror.

Jeff’s debut novel BAD GAMES was a #1 bestseller that spawned three acclaimed sequels, and now the first three books in the series have been optioned as feature films and are currently being translated for foreign audiences.

Free time for Jeff is spent watching horror movies, The Three Stooges, and mixed martial arts. He loves steak and more steak, thinks the original 1974 Texas Chainsaw Massacre is the greatest movie ever, wants to pet a lion some day, and hates spiders.

He currently lives in Pennsylvania with his wife Kelly and their cats Sammy and Bear.