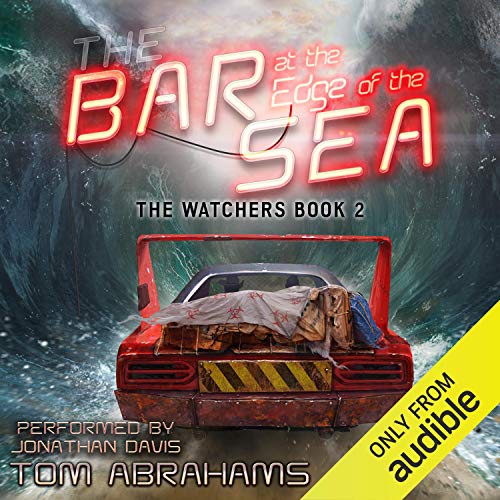 The Bar at The Edge of the Sea is the second book in The Watchers series by Tom Abrahams. It feels like this could have been read as a standalone but why would you. The first book absolutely blew my mind and I hope that if you’re looking at this that you’ll check that one out as well.

The book felt like a mixture of a bunch of apocalyptic movies thrown into a blender – usually when you do that you get some mush that feels like it’s trying too hard. But when Abrahams does it – what you get it not only probably one of his best books. You also get one of his most original feeling books. I know, that doesn’t make a lot of sense. The Bar at the Edge of the Sea felt a lot like pirate movies (none specifically, just obviously had that pirate feel) and it felt like Waterworld (and he even makes a joke about that at one point) – but it was this unique world unlike anything I’ve read before.

Abrahams introduces us to the fact that the world that they are living in (spoiler alert for the first book, so stop now if you haven’t read it) – throughout the first book they are in a water-less wasteland. This time there’s so much water – land is now hard to find. We learn that the places that they end up change depending on who dies and who is next to enter the domain of the Watchers. I thought that was easily one of the coolest parts of this book.

Abrahams also does a lot with sea monsters and you know I love a good sea monster book. There were lots to go around (along with land monsters as well). But, the monster-heavy scenes are new for him and it didn’t feel like it. He wrote those scenes like a seasoned pro and they just bled off of the pages.

Each character is unique and the character building on display in this book was top notch. Abrahams was able to make us like unlikable people – and really dislike people who are hate-able. He really pits the reader against these people to the point where you almost want to cheer when they do well and clap when the “bad guys” go down.

Overall, I believe this might be Abrahams longest book but it didn’t feel like it. The pages and time just flew by. Each new scene and new stanza of the adventure they were on felt unique. I wanted to know where they would end up next and I wanted to know what perils they would face. I also like that he built out the world that The Watchers are living in and explained a bit more about what they are doing (and if they do it for good or evil).

A world underwater. A missing weapon. A fight for redemption.

Zeke Watson has his first mission as a Watcher: a quest to find a kidnapped child who knows the location of a missing weapon. In the wrong hands, the weapon will upset the balance of good and evil across the known universe.

He seeks the child. The weapon. And redemption.

But can he find any of that in a flooded post-apocalyptic world filled with ruthless pirates – where his skills behind the wheel are useless and his newfound power is as unsteady as a skiff on choppy seas?

The Bar at the Edge of the Sea by Tom Abrahams
Narrator: Jonathan Davis
Length: 11 hrs and 38 mins
Series: The Watchers #2
Published by Aethon Audio, Audible Studios on June 23rd 2020
Genres: Post-Apocalyptic
Buy From Amazon
Buy from Audible
Also by this author: Home (Traveler #1), Canyon (Traveler #2), Wall (Traveler #3), SpaceMan
Also in this series: The Bar at the End of the World