Audiobook Review: Life of the Party by Bert Kreischer 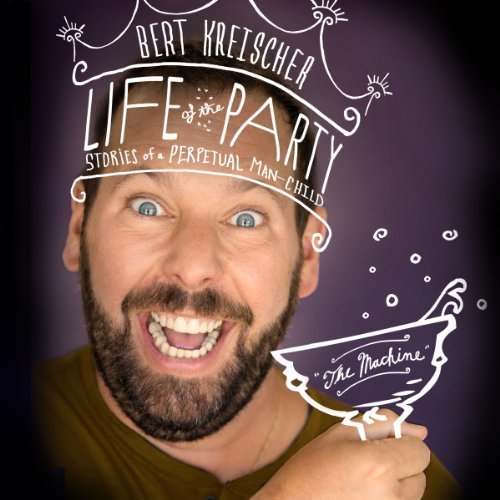 Bert is the Life of the Party, and will have you dying of laughter throughout!

DISCLAIMER: I am a HUGE Bert fan, from his stand-up to his ridiculous TV shows (Hurt Bert, Trip Flip), to his podcast. Actually, his podcast is where I heard that he had written a book. I’m a HUGE fan of comedians who write books, especially books like this–where he basically tells stories about things that have happened in his life. Honestly, these could all be stand-up bits, if he were a Mike Birbiglia (Birbigs has an amazing book: Sleepwalk With Me).

Now, on Bert’s podcast he mentioned how awful the audiobook of this was, but to be honest, it made it for me. I NEEDED to hear these stories told in Bert’s giggly and giddy voice. I just love hearing someone get into a story that they wrote down and lived. Kreischer is one of those dudes that he opens himself up to you and you just feel like you can really connect with him.

Yes, there are nasty stories in here (pizza box), and absolutely hysterical tales too (The Machine), there is some heartwarming stories too–with just enough “what the hell is wrong with me” added to it to make it funny again.

If you are a Bert Kreischer fan, read this… even better, get the audiobook, numerous times he breaks the “narrator” role and goes off–so funny. If you are a fan of OUTRAGEOUS stories, this book is also for you.

Bert does not think that anyone cared/cares to listen to this, but I felt the polar opposite.  I think that everyone needs to hear Life of the Party –  ESPECIALLY if you are a fan of stand up.  Bert is a natural storyteller, and there aren’t many out there that are better than him.  This collection of stories will have you shaking your head in disbelief and grabbing at the sleeve of your shirt to wipe away the tears from laughter.

A collection of outrageous stories by the standup comic, TV host, and inspiration for the movie National Lampoon's Van Wilder

Bert Kreischer doesn't know how to say "no." If he did, he wouldn't have gotten himself mixed up with a group of Russian mobsters on a class trip to Moscow, earning him his nickname: "The Machine." He wouldn't have wrestled with a bear or swum with sharks on national television. He wouldn't have (possibly) smoked PCP with a star of Saturday Night Live. And he wouldn't have been named the Number One Partier in the Nation by Rolling Stone, inspired the movie National Lampoon's Van Wilder, or performed standup to sellout crowds across the country.

The stories Kreischer shares in Life of the Party are a guidebook on how not to grow up. From his fraternity days at Florida State University, to his rise as a standup, to his marriage and first brushes with fatherhood, Kreischer shows you a path that may not lead you to maturity or personal growth. But it will lead you to a shitload of fun.

Make Something Good Today by Erin &