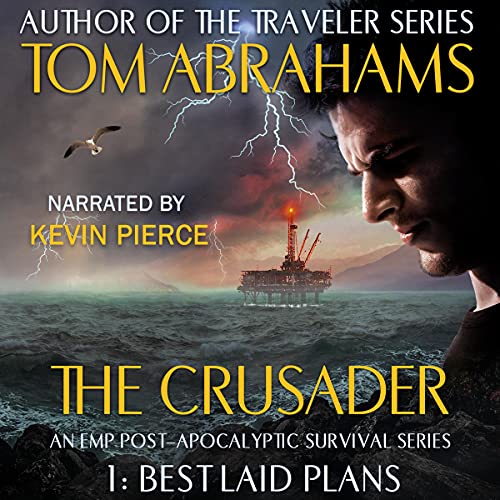 Battle-like But Darker. So Good.

I will start this one off by saying that this isn’t anywhere close to my first book by Tom Abrahams. Having read and thoroughly enjoyed the Traveler series with Battle as the main character. I wanted to preface this review by pointing that out because a lot of my post-apocalyptic best memories (what a weird phrase) have been in the worlds that Abrahams has created. So, knowing that and diving into another PA world – I had my hopes sky-high. I know that Abrahams knows how to write a great story and interesting characters.

Something else that he’s really good at is writing about situations that I wouldn’t have thought of, but would be completely normal for some Americans. Best Laid Plans was one of those circumstances. What would happen if you were stuck on an offshore oil rig when the power went out? That’s exactly what John Back and the crew have to deal with in the opening of this book. I also find it funny that Abrahams is always able to always put callbacks to his other books in these stories. One of the characters talked about how he read PA books and that being stuck on the rig reminded him of the character that got stuck on the ISS in SpaceMan. Which was right where my mind was going at the time.

Best Laid Plans is a story in two parts (and I respect Tom for not making it two different books). The opening is around getting to know Beck, who he is, a little about his demons, and then about the first few days post-attack. The second half is some years later as he continues on his quest for vengeance and revenge. They don’t feel disjointed at all and I’m actually happy that the author decided to tell some of the prior year’s tales via quick flashbacks or additions to normal chats the characters were having.

The first half was interesting and new to me (which is pretty hard to do in the PA genre). What would happen to the workers on the rig? How would they get to shore safely if the safety boats didn’t work? But the second half was pure Tom Abrahams Post Apocalyptic storytelling™. Beck reminded me a lot of Battle but even more damaged (I’m seeing a trend here, especially after reading about a super dark character in Abrahams’ last book, Buffalo Bayou. If you haven’t read the Traveler series – you’re missing out, but this reminds me of all of the good things that it had going but it’s even more unpredictable. Beck feels like he could go off the rails at any moment.

I also want to throw my hat in for a prediction here. Since I’m a bit of a TA superfan and I know how some of his stories go – I’m interested to see if one of the stories is 100% from his daughter’s perspective. If so, how much like Lou will she be (I know that Lou was younger, but I feel like they have the same heart and spirit). I hope I’m right, but even if it’s not told from her POV, I’m interested in how much her story will remind me of Lous. Except instead of Battle meeting her and becoming an adoptive fatherlike figure – it’ll be a reunion.

Overall, I’m happy to have more PA books from Abrahams to read. Especially with Kevin Pierce narrating them. This was a really good introduction to Beck and this unknown world. I’m excited to get to know him more and find out exactly what happened to the US in the coming books.

John Beck is the hero we don’t deserve, but he’s exactly who we need when the world falls apart.

When a surprise EMP attack kills the power grid across most of the United States, the nation crumbles – but a hero rises. John Beck makes it his mission to help the weak against the strong in a new, lawless wilderness. All the while, he fights the demons of his past as he searches for the only family he has left.

Best Laid Plans is book one of The Crusader EMP Post-Apocalyptic Survival Series and is perfect for fans of Franklin Horton, Ryan Schow, Kyla Stone, Jack Hunt, and AR Shaw.

Buy from Audible
Also by this author: Home (Traveler #1), Canyon (Traveler #2), Wall (Traveler #3), SpaceMan
Also in this series: No Good Deed, One In The Hand