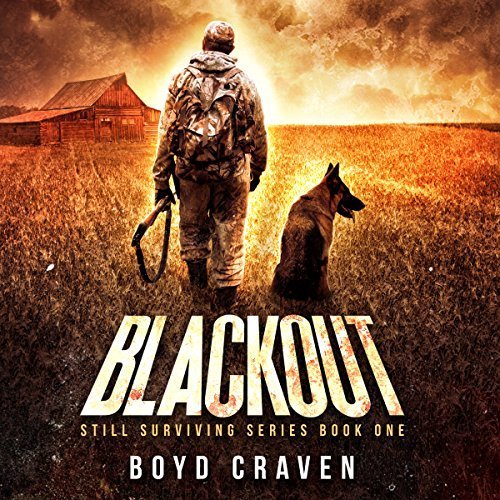 Raider is the Real Star

Blackout tells the story of a down-on-his-luck guy Wes.  He lives with his grandparents, is looking for a job, and oh yeah – sells moonshine on the side.  He’s a likable guy who seems like he would do anything for the ones that he loves and cares about.   Insert Raider – the dog that stumbles upon Wes and his family one day.  He decides he’s going to train Raider since he’s part German Sheppard. Little does Wes know just how quickly he’ll rely on Raiders help.

You can tell that Craven loves dogs (or maybe his dog?) I own an Imo Ino (American Eskimo/Shiba Inu Mix) and he does some of the things that Raider does in Blackout.  He chuffs and will huff when I’m talking to him and he doesn’t want to hear it. He’ll sigh when I’m talking about him in the same room, etc, etc.  This is the third story by Craven I’ve read where there was a dog main character and they are three of my favorites.

The story itself starts off a little different than the typical CME story (thank you, Boyd, for not calling it an EMP, thank you, thank you!) We get to know Wes, his grandparents, and a little about their history being bootleggers. I found that part just as interesting as I did once the lights went out. It was a totally unique take on the main character and it made him much more believable and real.

The insertion of the dog trainer (and her entire background later in the story) was unexpected and something that I did not see coming at all.  Wes, the trainer, and a third party (trying not to spoil anything) and their interweaving stories also added another dimension to Blackout that I enjoyed quite a bit.

This isn’t a perfect five because I’m mad at Craven. I was driving home and I stopped at the store to grab something.  I thought I had at least 10 more minutes in the story.  Then I heard the dreaded “the end”. Wait, what? Craven! Don’t do this to me! Sure I want to read much more about Wes, Raider, and the families but that felt cold man. (I’m not really mad, I was just genuinely surprised that the book was already over).

Overall I thought that Craven did a great job making a dog a better character than most main characters in Post-Apocalyptic books I’ve read. Combine that with narration by Kevin Pierce and you have a winner. If you enjoyed the two Opus stories by him – you’ll enjoy this one, too.

Westley Flagg isn’t your usual lawbreaker. He’s a poacher, a moonshiner and a prepper, out of necessity. Despite trying to live on the straight and narrow, he knows the law can turn things on you in a heartbeat. When Wes has to come up with money for his Grandpa’s surgery, he gets involved with an unsavory group.

Living deep in poverty for most of his life, he’s become resilient and flexible, but college education can only take him so far. A solar storm sends the northern lights as far south as Texas, and cascading failures in the grid cripple the nation. Now, without communications, Flagg has to prove he has what it takes to still survive.

Also by this author: One Man's Opus, The World Burns (The World Burns #1), Opus Oddessey, All Dark
Also in this series: All Dark, Darkest Days (Still Surviving #3), Dark Hope