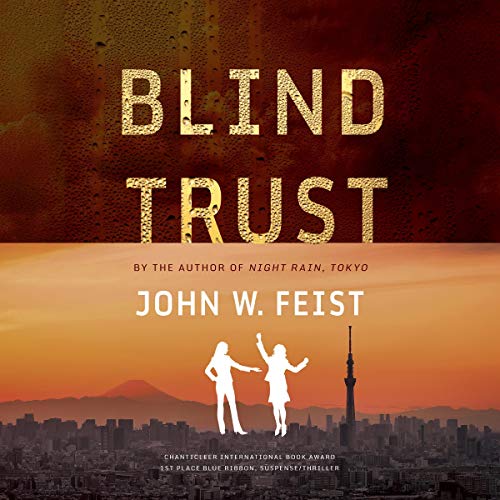 Blind Trust – noun – a financial arrangement in which a person in public office gives the administration of private business interests to an independent trust in order to prevent conflict of interest. Under the trust, the owner does not know how the assets are managed.

So, knowing that, going into this, I knew that things were going to get dicey. I wasn’t sure what to expect with how interesting and twisty-turny Feist’s first book, Night Rain, Tokyo was. We have some of the same players here, but they are thrust into a different situation. Along with flashbacks and new scenes that remind them of what they went through in the last story.

Blind Trust was one of those books that felt like it could have been much heavier and it would have lost my attention. I can tell that Feist has a history with a lot of the topics because he’s able to go into great detail about something without going overboard. He’s able to explain pipelines and what/why they’re used in a way that I go “oh, okay” instead of “why do I care”. The same goes for the markets and the different business aspects of these stories.  Feist is able to write them in a way that doesn’t bog down the story too much, but I understand them enough to know why they were mentioned.

Overall, I thought that Blind Trust was missing some of the thriller aspects that Night Rain, Tokyo had, but it seemed to replace them with deeper looks into our main characters and I’m okay with that trade off. Michael Kramer does a great job narrating this, giving life to this story and allowing me to feel like I was really there with the characters.

What good can come of a nationwide power outage? What power can Japan’s first woman prime minister wield—even in her own family? What power play can end a war? Whose business is it, anyway? Brad Oaks, American steel executive, and Amaya Mori-Oaks, Asian art connoisseur, put their family planning on hold to tackle these questions.

Kagono’s bold plan to exploit natural gas discoveries from either China or Russia sounds good in theory, but she faces stark impracticalities. A Russian deal could cinch peace treaty negotiations stalled for seventy years. But her brother’s business vanity threatens to stifle her plans. If she overrides him, she risks financial scandal. She turns to Amaya—trusted since their college days—for common sense, and to Brad for unbiased, elegant business solutions.