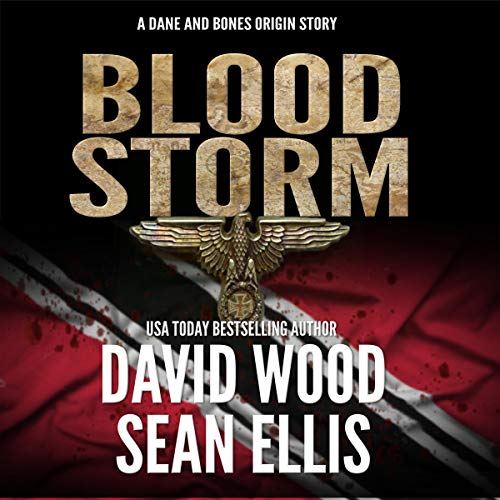 These Dane and Bones origin stories are always a nice change of pace from the other stories – but they’re also not as good.  That’s not to say they’re bad (they’re not even close).  I just miss Dane and Bones’ ability to do what they want when they want to. That being said – it was super fascinating to see how they were finally released from duty and what happened on their last mission.

I absolutely flew through Bloodstorm – honestly I think I finished it in two evenings.  I wanted to know how it was going to end from the first few chapters.  That’s a sign of fantastic writing.

The actual story within Bloodstorm tells of a relic (I won’t spoil the reveal of what it actually is) that can be traced back through many powerful people. It has been used to convince others to follow. And it may have been used by Hitler and the Third Reich.  The hunt for this leads Bones and Dane all over the world and even almost leads to their deaths.

If you go into a David Wood and Sean Ellis book think you’re going to be underwhelmed then there’s something wrong with you.  Wood and Ellis have blown me off my feet in every novel they’ve written together.  Bloodstorm was no different.  Even though I wished that Dane and Bones were more autonomous like they are in the post-Origins novels – this one was still full of action, intrigue, and of course Bones’ dirty jokes.

Twelve years ago, the novel Dourado by David Wood introduced the world to the treasure-hunting duo of Dane Maddock and "Bones" Bonebrake - former Navy SEALs on a quest to discover the strangest treasures of the ancient world. Over the course of more than twenty novels, you’ve lived their adventures from the beginning of their career as elite commandos to their battle against the worldwide conspiracy known as the Dominion.

Now, the time has come to tell the story of Dane and Bones’ final, shocking mission as Navy SEALs.

While still mourning a great personal loss, Maddock and Bones are sent undercover to Moscow to assist an old acquaintance Zara Leopov, a navy intelligence officer. Leopov is orchestrating the defection of a Russian archivist who has discovered a crucial clue concerning the fate of a high-ranking Nazi official who went missing at the end of World War II, a man who may have carried with him the most sacred relic of the Third Reich.

The search to discover the truth will take Dane and Bones around the world and throw back the curtain on a conspiracy born in the early hours of the Cold War - a shadow government that is manipulating the global powers, driving them headlong into the storm.

The Secret of the Stones by Ernest Demps

The Dane Maddock Adventures Volume 1 by