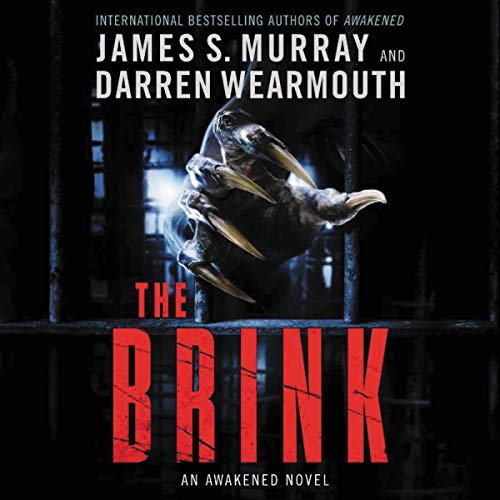 I’ve been sitting on this one… with no good reason.  I enjoyed Awakened (I believe I called it a candidate for the best of 2018).  I think I was worried that The Brink was going to let me down.  In comparison to the title I gave Awakened – it did, but not really.  The Brink was less of a horror novel and more of a political thriller with some horror elements thrown in. I’ll explain…

The Brink tells the story of Albert Van Ness and his shadow organization.  I have to tip my hat to Murray and Wearmouth – I honestly cannot think of a villain in another story that I disliked more than Van Ness. He was hateable in every single way. His organization is doing things that are awful and he’s trying to extort major governments for massive amounts of money in the process.

Part revenge story and part political thriller – The Brink was still a well-told story.  I flew through it and couldn’t wait to see what was next.  The opening (alternate history) was fascinating and told me right out of the gate that The Brink was going to be different.

A good book for those who like political thrillers and horror books.  If you read Awakened – you’ll enjoy The Brink as well.

Former NYC Mayor Tom Cafferty has been haunted by the horror of a single day. The opening of the brand new Z-train subway line beneath the Hudson River—the supposed shining moment of his tenure. But the ribbon-cutting ceremony turned deadly when the train carrying Cafferty’s wife and other citizens was attacked by a horde of hyper-intelligent, bloodthirsty creatures previously unknown to humanity.

Everything changed for Cafferty, ex-NYPD officer Sarah Bowcut, and tech-expert Diego Munoz that day. They had uncovered the deadly truth: the attack was no accident.

And now the creatures that wreaked havoc underneath New York have spread worldwide, and with a massive cover-up—and a secret organization holding nations hostage with the knowledge of how to kill them—Cafferty’s team must fight against impossible odds to save the entire planet from an apocalyptic scale disaster.

An explosive and thrilling international adventure, the stakes are even higher in the latest book from bestselling duo James S. Murray and Darren Wearmouth!