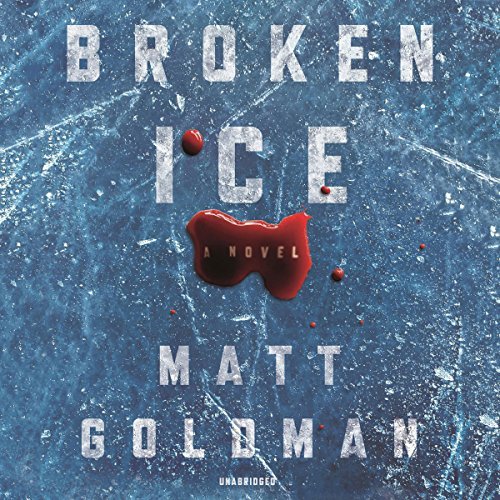 A Unique Setting for a Crime Thriller

The first thing I will mention about Broken Ice is that I really enjoyed the setting of it. Minnesota isn’t the norm when it comes to most books and the setting along with some of the stereotypical people, accents, and sports love made this a really nice change of pace for me.

I live near very close to Canada and that plays into my love of this book for two reasons. One is that Goldman wrote a lot about hockey and in an informed way. He didn’t just talk about hockey like it “just there”. He talked about it and included it like its own character. And it really was. It was interwoven really well into his story and made for an enjoyable change. The second way I realized that I can’t really write about without giving away a major plot point. Once you read it and know that I live pretty close to the border – you’ll understand.

Nils is an interesting guy who I’m a little bummed I didn’t get to know better since I did not know about or read the first book until starting this one. I will probably go back and check out Gone To Dust now that I know I enjoy Nils as a character. He and his assistants were a blast to follow and made this book fly by.

I love crime fiction and the crime(s) in this novel were kind of all over the place while Andrews and the real murderer were trying to throw Nils off the case. The murder weapon was also unique and something I’ve never read about before. I really enjoyed the way that Nils dealt with his issues personally while trying to solve this case for numerous people – even against his partners better judgment.

Combine this with the amazing narration by MacLeod Andrews and you have a true winner. I thought that Broken Ice was a really enjoyable crime thriller that I would recommend to someone in need of a nice change of pace.

Nils Shapiro has been hired to find missing Linnea Engstrom, a teenager from the small northern hockey town of Warroad, Minnestota. Most of Warroad is in Minneapolis for the state high school hockey tournament, and Linnea never returned from last night's game. Linnea's friend Haley Housch is also missing - and soon found dead.

Shot through the arm with an arrow at the Haley Housch crime scene, Nils should be in the hospital recovering from his near fatal injury, but he knows that the clock is ticking. Linnea could be anywhere, and someone doesn't want her found. Is Linnea a victim, or is she playing a dangerous game? As bodies start piling up, the clues lead Nils and Ellegaard north to Warroad, a small, quiet town with many secrets to hide.

The Other Mrs.: A Novel by Mary Kubica (