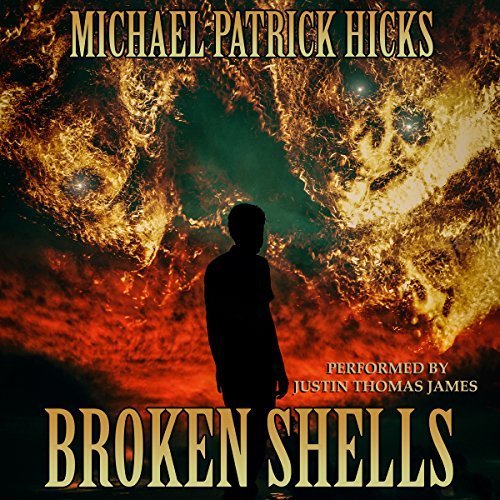 Broken Shells Kept Me Up Late

I already read this book but I had to listen to it when I found out it was coming out as an audiobook.  Having already read it – I had a voice in my head that I associated with Antoine in my head and believe it or not – Hicks and Hempel at Bleeding Ear Audio were able to find someone who fit and exceeded it.  Justin Thomas James is absolutely perfect for this narration and I found myself enjoying it more the second time around (even know what was going to happen).

I’ll include my original review below because it is still exactly what I though reading this a second time with even more excitement and enjoyment.

When I started this book I tried to figure out why he named it broken shells.  I had images of broken shells on a beach – I could not have been more wrong.

Hicks has a way of scaring the hell out of me.  Seriously.  I made the mistake of reading this over two nights — both at night.  NOT the brightest idea.  The second night, the night I finished it, I ended up being up another 20 minutes playing a game on my iPad to get the images out of my head.

I’m familiar with Hicks’ novellas and he’s able to tell stories that are amazing in 100 pages that most authors strive for in full-length novels.  This one included.  I felt for Antoine.  His story, though short was incredibly well explained.  I understood he was a down-on-his-luck kinda guy who was looking for just one thing to go right.  I hoped for him.  In 100 pages. I felt bad for a guy that is fictional. Just let that sink in.

I will not go into detail about the monster(s) in this story, just know that a lot of people will have a hard time with them.  I want to say why (look away for a moment, creepy crawlies), but I don’t want to ruin the fun for anyone.

I’m finding that I like horror more and more and Hicks is one of the reasons for that.  He’s able to write a story that makes my stomach turn but at the same time makes it so that I can’t stop reading.  It’s like a literary car crash.  You want to look away but you just can’t!

Overall, another novella from Hicks and another winner in my mind. If you’re familiar with his work or like well-written monster stories, Broken Shells if for you.

Antoine DeWitt is a man down on his luck. Broke and recently fired, he knows the winning Money Carlo ticket that has landed in his mailbox from a car dealership is nothing more than a scam. The promise of five thousand dollars, though, is too tantalizing to ignore.