The Bug Hunter by Ken Davenport (Narrated by Perry Daniels) 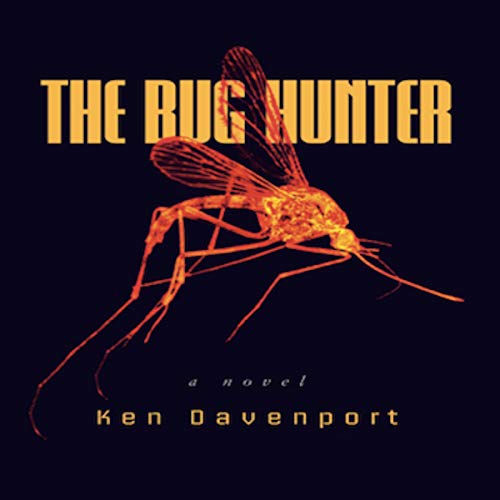 A “Definitely Could Happen” Thriller

The Bug Hunter really drew me in with its cover first. I’d never heard of the author but the cover alone told me that this was going to be a story for me. I love bio-thrillers and knew, just from the title/cover combo that this would most likely be about something like that.

I was right, this was definitely a bio-thriller. Basically, a book about a terror group utilizing bugs as vectors for their biological attacks. It starts with people getting sick and turns into much worse.

The story itself was well written and paced out. There were a few times that I thought the action was going to really pick up but it was pretty level throughout. I think it was missing that little bit of over-the-top action that some of these have – but I won’t dock it too bad for that. But… that doesn’t mean that it’s not tense or edge-of-your-seat thrilling.

The thing that sticks out the most is that Davenport wrote a book that felt real. I was convinced that groups out there will (or already have) tried something like this. The science felt real and he wrote enough about it to hook me but didn’t do too much as to lose interest or over-explain.

Overall, The Bug Hunter was a well written book that I would but into the “definitely could happen” category, making it just a little more terrifying of a read.

Terrorists have turned nature itself into a devastating weapon. And only one man can stop it.

The year is 2026 and up and down the Eastern seaboard of the United States a virulent toxin is killing people. What was initially believed to be food poisoning turns out to be a terrorist attack using genetically modified insects to poison the American food supply.

For Gabriel Marx, news of the poisoning is eerily familiar. A Marine Corps veteran and trained viticulturist, Gabriel is now working as a vintner at Landmark Estates Winery in California, but was once part of a secret CIA effort to use insect vectors to destroy the Afghan Taliban’s poppy industry. He’s long feared that genetically synthesized toxins delivered by insects could be used as a terror weapon.

One day a stream of black SUVs carrying the Secretary of Homeland Security shows up at the vineyard, and Gabriel is recruited to help the government respond to the attack. He is drawn into a complex web of rogue scientists with links to ISIS and Chechen terrorists, and discovers that an even more devastating attack is imminent.

Merging cutting-edge synthetic biology with global politics and international terrorism, The Bug Hunter is both thriller and cautionary tale of how advances in technology can be used to turn nature itself into a devastating weapon.