The Calculating Stars by Mary Robinette Kowal (Narrated by the Author) 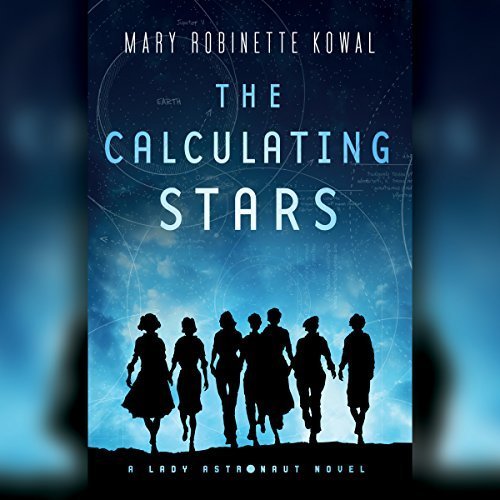 Simply out of This World (Pun Intended)

The Calculating Stars was simply out of this world (pun intended). As the first full novel of The Lady Astronaut series, it was a phenomenal stand-alone piece but, after reading it, who wouldn’t want more? Part Hidden Figures, part The Martian, and part The Day After Tomorrow, Mary Robinette Kowal’s The Calculating Stars quickly climbed to the top of my “best books of 2018” list.

The story begins in the 1950’s with a meteorite decimating Washington D.C. and much of the surrounding area while newlyweds Elma and Nathaniel Wexler are vacationing in the mountains. Elma (who had been a WASP pilot in WWII and holds a doctorate in math and physics) and her husband (an esteemed engineer), are both employed by NACA, the National Advisory Committee for Aeronautics. When they hear the impact, they immediately begin calculating and assessing the damage.

Together, they make their way back to their NACA co-workers and soon discover that the meteorite landed in water, initially sparing many lives but unfortunately triggering a “climate cataclysm that will eventually render the earth inhospitable to humanity.” The severity of the impending climate changes’ potential impacts on the planet and those who inhabit it is coupled with an abbreviated timeline developed by the NACA calculators, lending a sense of urgency to the story and rapidly accelerating the space race.

The Calculating Stars is largely plot-driven, with richly developed characters, and a multitude complex conflicts, including man vs. self, man vs. nature, and man vs. society. Elma, our protagonist, battles an anxiety condition,  competes with other candidates for a spot in the astronaut program and confronts the patriarchy in an effort to overcome the odds and…well…save mankind. Kowal masterfully develops her characters in a way that leaves readers feeling incredibly invested in their well-being–I found myself as worried about Elma’s family as she seemed to be.

I spent much of book the rooting for the female candidates, snarling at Parker and Clemons and feeling grateful for good men like Nathaniel Wexler. My emotional investment was significant in a way that’s only possible with such a masterfully written and narrated book. The Calculating Stars left me with enough closure that I could sleep at night but was so great that I can’t wait for book two to come out on Audible! I’ll be listening for sure.

I initially felt some trepidation when I realized the author narrated her own work. I usually enjoy pieces where authors read their own memoirs, but I have struggled through a few books of other genres where the authors’ narrations were a bit flat and one-dimensional. Some authors are amazing narrators but others aren’t as gifted when it comes to voice acting and just don’t seem to understand the value of working with another professional. If you share my hesitation, let me assuage your fears: Mary Robinette Kowal is a truly gifted story-teller. I was impressed by both the quality of her writing and her amazing voice acting abilities. Kowal utilizes a variety of reading styles, accents, pitches, tones, and speeds to further develop her characters’ personalities, build tension, convey relief, demonstrate anxiety and fear, and distinguish between dialogue and news broadcasts. Kowal’s narration was exceptional. I enjoyed her reading of The Calculating Stars so much that I added her to my list of favorite narrators and searched audible by narrator to find more of her work.

On a cold spring night in 1952, a huge meteorite fell to earth and obliterated much of the East Coast of the US, including Washington, DC. The ensuing climate cataclysm will soon render the Earth inhospitable for humanity, as the last such meteorite did for the dinosaurs.

This looming threat calls for a radically accelerated effort to colonize space and requires a much-larger share of humanity to take part in the process.

Elma York’s experience as a WASP pilot and mathematician earns her a place in the International Aerospace Coalition’s attempts to put man on the moon, as a calculator. But with so many skilled and experienced women pilots and scientists involved with the program, it doesn’t take long before Elma begins to wonder why they can’t go into space, too.

Elma’s drive to become the first lady astronaut is so strong that even the most dearly held conventions of society may not stand a chance against her.