Catch and Cradle by Katia Rose (Narrated by Sophie Daniels) 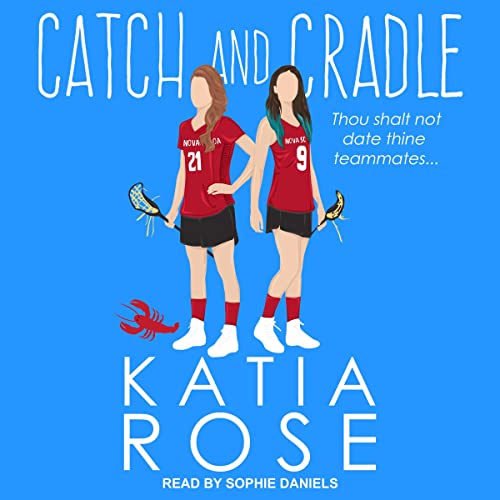 I Really Enjoyed It

I love a good sports story – there’s something about it. I think because I liked to play sports and because a lot of my friends were part of teams. And that being said – Catch and Cradle’s cover featuring two women lacrosse players – I felt like it had to be a good story AND a good sports story. In my eyes – Katia Rose nailed both.

The heart of the story is dealing with women who’ve been hurt before but for different reasons. And one of them decided instead of going for it again they were going to lock it all away. Not in an ice queen way necessarily, but definitely in a regimented way that allowed no time for falling in love.

Each woman in this was a delight to follow along. I thought that both of them were interesting in their own rights – but when they were orbiting each other – things definitely got better.

I forgot to mention that Rose does a wonderful job including a nonbinary teammate and secondary character in this story and it wasn’t a “here’s one sentence” type role – it was one of her best friends and it really made the story even better. I love seeing inclusion like this and it doesn’t feel forced or overdone.

Overall, I thought that Catch and Cradle was an excellent sports sapphic romance that had lots of funny teammates, college life, and world-class athletes just being themselves and being vulnerable. I really enjoyed it.

The UNS Women’s Lacrosse team doesn’t have an official policy against inter-teammate relationships, but those words might as well be carved into stone tablets in the middle of the field. After witnessing way too much drama in the past, Captain Becca Moore is intent on keeping her players’ love lives out of the locker room.

Becca has no time or tolerance for any distractions from the game. Unfortunately, that’s exactly what Hope Hastings has been since the day she showed up for tryouts: charismatically dorky and kissable distraction.

Hope knew she was headed straight to the danger zone from the moment she saw Becca’s flame-red hair and surly captain smirk. She’s spent the past two years writing off her attraction as a harmless crush, but starting a new semester fresh out of an awful relationship makes Hope realize just how far from harmless the heat between them really is.

The friendships of a tight-knit team and their shot at the title are all lying on the line, but as Hope and Becca get closer to bending rules they’ve sworn never to break, they realize they’ve put their hearts on that line too. Losing has never been an option, but winning might cost more than they’re willing to pay.