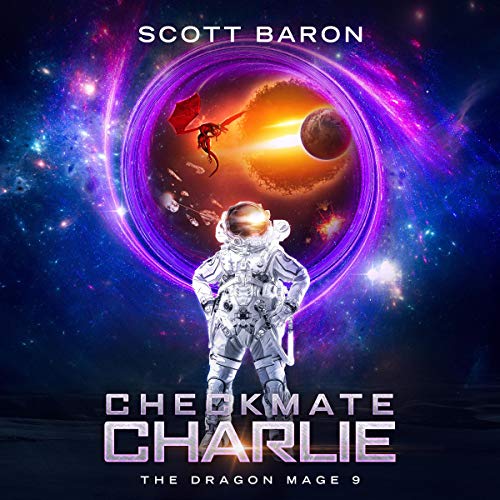 I didn’t want to write this review – because writing the review admits that this series is over. I don’t want to say goodbye to Charlie and the magical characters that have been in the nine different books. I don’t want to, but Baron did a darn good job writing a story that I’ll remember.

Saying goodbye is hard, but saying goodbye after 9 books with these characters was going to take a lot of delicate and intricate writing. Fortunately, Scott Baron was able to do both. He didn’t write a slow book or even a one-major scene book. He was able to wrap up a lot of different story-lines while also keeping the action and adventure up like the other stories.

I went into Checkmate Charlie worried that he was going to forget someone or leave some story unfinished or some rock unturned – leaving me feeling incomplete. He did not. I am so satisfied with the ending and this entire book. Bravo Baron, Bravo.

The entire series was brought to wonderful life by Gary Bennett who has lent his voice to Charlie and his crew of (among MANY other things,) space pirates throughout the entire series and has done a magnificent job. He IS Charlie, but he was so much more. He allowed these stories to come alive even more than Baron wrote them. He really gave the dragon wings (sorry, I had to add a pun in) and I’m glad that I was able to listen to all nine of these stories on audio in such a short time. Recording, editing, and proofing audiobooks isn’t an easy job. Doing a bunch of them in the same universe in the time that these have come out deserves a standing ovation.

Overall, I’m sad it’s over, but I’m happy I was along for the ride. This is the 2nd time I’ve had to say goodbye to some characters and the first for Charlie and the others. I’ll miss them, but I’ll also remember the stories well.

In an intergalactic pool of tech and magic, Charlie found himself in the warm spot. Whether or not that was a good thing only time would tell.

Friends and comrades had put their lives on the line, defending not only their homes and loved ones, but their galaxy as well. Both galaxies, to be exact. And more than a few had paid the ultimate price.

Now the threat of a massive war spilling over between both realms had gone from a vague threat to a deadly reality, and facing Visla Dominus’s incredible power, Charlie and his friends were forced to call in every favor they were owed.

Even so, there was no guarantee of success. Underdogs to the last, Charlie and his friends prepared themselves for the battle to end all battles, one that would result in either victory or death.

The final book in the Dragon Mage series.