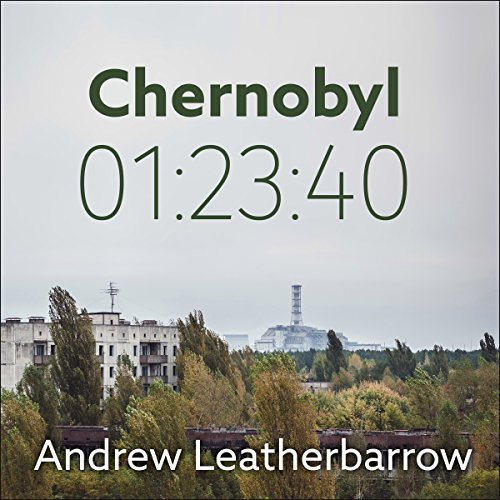 A Slightly Different Take On the Same Story

The narration for Chernobyl 01:23:40 was done by Michael Page, who does a really nice job.  He takes a very dry historical topic and does his best with it.  Combined with the little bit of light-nesss that Leatherbarrow tried to sprinkle in made this easier to listen to.  I honestly don’t think I could have gotten through this book if it wasn’t an audiobook.  I would have been skipping chapters to see what each one was about.

This is the kind of documentary I would watch the heck out of on a rainy or snowy winter day.  The book did a pretty great job explaining what happened and what the author found while researching into the Chernobyl disaster.

The book started out with the history of why Chernobyl was built and what went wrong before it ever went wrong (which I didn’t know about). There were corners cut, and there were also plans to have more reactors built.  Thankfully, this didn’t happen due to the problems that arose from the ones that were built.

The story was a little boring, but I knew what I was getting into when I grabbed a non-fiction book on a nuclear disaster.  Still, even while being a little dry, the book was still incredibly enjoyable.

If you are a history fan, especially one who follows natural or man-made disasters, then I think you will enjoy Leatherbarrow’s telling of Chernobyl.

At 01:23:40 on April 26th 1986, Alexander Akimov pressed the emergency shutdown button at Chernobyl’s fourth nuclear reactor. It was an act that forced the permanent evacuation of a city, killed thousands, and crippled the Soviet Union. The event spawned decades of conflicting, exaggerated, and inaccurate stories.

This book, the result of five years of research, presents an accessible but comprehensive account of what really happened – from the desperate fight to prevent a burning reactor core from irradiating eastern Europe, to the self-sacrifice of the heroic men who entered fields of radiation so strong that machines wouldn’t work, to the surprising truth about the legendary “Chernobyl diver”, all the way through to the USSR’s final show-trial. The historical narrative is interwoven with a story of the author’s own spontaneous journey to Ukraine’s still-abandoned city of Pripyat and the wider Chernobyl Zone.