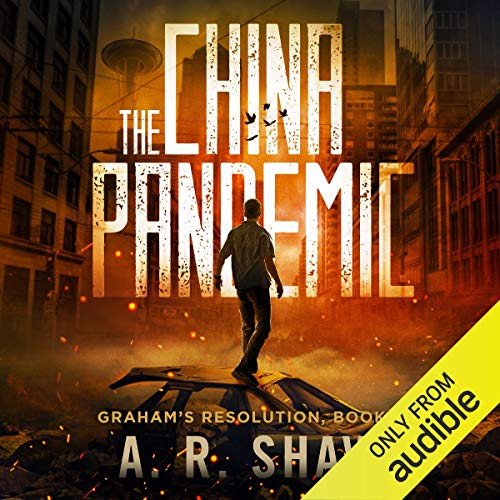 So having read Shaw’s newest book, Rebel Blaze, I thought I would go back and start one that’s been in my library for quite some time. The China Pandemic, originally written in 2014, tells a shockingly similar story to what people were afraid that the Coronavirus could have become. I wasn’t sure when I first started reading it how it was going to go. Just the name “The China Pandemic” had an eerily close name to “china virus” that someone kept spouting when this all started. I was worried that it would rub me the wrong way, but the book was much more about people than about the virus or the politics around it.

Now, in this book, the virus kills 98% of the population, leaving on a small number of people to live out their days in near isolation. Shaw did a great job writing a story about the survivors. I thought that Graham, earlier in the story was a bit weak and definitely someone who wasn’t going to have the fortitude to survive. But as he was given reasons to live and reasons to fight – I thought that he ended up growing into a likeable character and someone I ended up rooting for. A few times I was like “oh that’s how I would have acted” but in most Post-Apocalyptic books, guys who act like me end up dead right away like a fat kid in a horror film.

The collection of characters from Graham to Bang, the girls, and the preppers were eclectic and interesting. The preppers were really interesting to me but they weren’t shown too much. I find that the typical PA books I read revolve around characters like them or people who really can’t get the pandemic figured out. This story seemed to be about someone sort of in the middle. He had a plan, it was derailed a few times, and then he acted on it. But along the way he found some more people and was able to help lots more. It was a slightly different take that I enjoyed.

The biggest complaint I would have about this one was that the story just sort of ended. I was up late listening to this knowing the end was near and I kept checking the amount of time left. With 20 minutes left I started preparing myself that the overall story arc wasn’t going to be completed. I feel like Shaw tied up some of the loose ends but there were quite a few more left hanging.

The narration by Darriel Driml was okay, it wasn’t great and it wasn’t bad. A few times I thought his pacing we even slower than the normal audiobooks I listen to. And other times I felt like he was putting too little emotion into the story. Some people like and prefer that, but I don’t want to listen to someone who has no emotion, especially when things start to speed up or get interesting. As I said though, it was just okay. I’ve definitely heard worse and better from different narrators.

What the world dreads most has happened because of a mutated avian bird flu (H5N1) pandemic. It has ravaged the globe. Only 2% of the population has survived. A dying mother knows that her young child is among the few remaining immune to the virus. What will she do to ensure his survival before her own coming tragic death?

Meanwhile, Graham has buried his last remaining family member. Following his father’s advice to make it to the family cabin, he meets with triumph and tragedy; learning new rules along the way. Just when he thinks he’s finally got a handle on this new world, he’s taken by surprise, as he learns he’s not alone. A hidden yet vulnerable community of Preppers are nearby. Will he find the strength to escape these dangers and go on living? And more importantly, will he have the ability to protect those he’s come to trust?