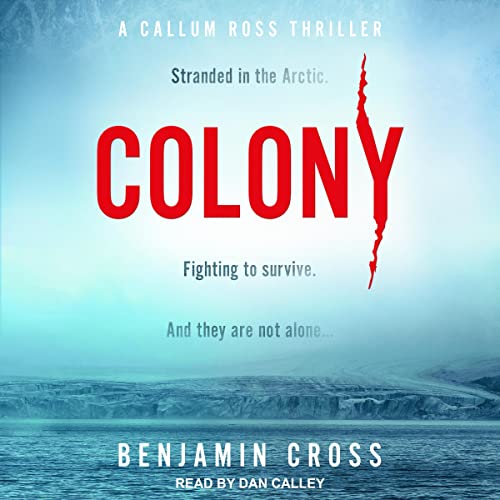 Colony is hard to pin down. I have to start off by saying that I enjoyed it. It had a lot of elements of other stories that I liked. A lot of which I can’t talk about, as to not spoil some of the surprises. But at other times it was a bit drawn out – and even a few times it felt a little bit like the plot was lost and they were just sort of out there spiraling.

I went into it with basically no knowledge of what was going on. I saw the cover and thought “yup, that looks like a book I’ll enjoy” and went into it without even reading more than two sentences of the synopsis.

I couldn’t tell what this book wanted to be. At times it felt like it was a cryptid-like story in the same regard as The Yeti or Zombie Bigfoot. Other times it felt like it was a spy-thriller. And finally, it also felt like the “expedition/adventure” stories I enjoy, like Serpent. I couldn’t tell which one that Cross wanted and it almost felt like they wanted all three – so they mashed them together. I’m not saying that’s a bad thing – it made for a really interesting book. But what it also did was make me feel like it lost the point a few times. There would be intense scenes that would relate to one of those three topics for multiple chapters. Then the next chapter would just be about something else. The flow wasn’t super messed up or anything – just something that caught my attention and I wanted to point out.

Now, I’m saying all of this because I still liked the heart of the story. Colony was very interesting and the three different sub-genres at play inside of it were all very well thought out. I thought that Dan Calley did a pretty good job with the narration. A few times it fell a little flat because of the change in characters or the change in tempo that wasn’t matched – but very listenable.

Harmsworth. A remote, mist-shrouded island in the Russian Arctic. Archaeology Professor Callum Ross makes the discovery of a lifetime: a prehistoric ice mummy preserved for thousands of years by the sub-zero temperatures. Only, they didn’t die of natural causes….

As Callum races to unravel the mystery of the mutilated corpse, others race to sabotage the expedition. He and his team are left stranded, and they are not alone on the island. Someone, or something relentless, is stalking them.

As the arctic mist descends and the death toll rises, the team is thrust into a nightmare fight for survival, involving submarines, cyber warfare and Spetsnaz. But none of this can prepare them for the real terror that survives deep within the island’s heart: a secret so ancient it’s been overlooked by time itself.