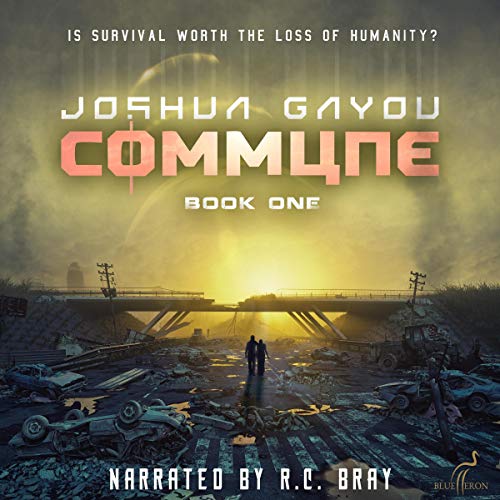 I’ve read a lot of post-apocalyptic books.  A lot.  And when I find something new I’m always shocked.  In PA books there’s always a reason for the apocalypse, the journey is hard (in most books), and they get to where they are going only to have to defend their turf.  Sure, that’s the same basic plotline of Commune, but the way that it gets there is totally different.  Gayou was able to write new life into the same kind of story.  It was a difference in tone. It was told from the point of view of storytellers (and the person recording the history of the story). Which made it completely unique among hundreds of books I’ve read in this genre.

Each person’s story was different.  Just like the way that everyone has their own origin story to life.  Each person in Commune felt different and interesting in their own way.  There were quiet people who you knew had a lot going on under the surface.  And the caring ones who cared, almost to a fault.  Along with what I would call someone with the “papa bear” mentality.  They all came together in different parts of this book and made something beautiful in the ashes of the apocalypse.

The back and forth of the characters playing out the same or similar situation really made this book stand out to me.  I loved hearing about the story from Jake’s perspective and then Amanda’s.  I also really like that everything is happening in the past and Commune is a sort of retelling.  A ‘back to your roots’ sort of storytelling. Like the older generations used to do.  That was how history was passed down from generation to generation.  The back-to-basics sort of feel, looking back on their stories was something I’ve never read in any post-apocalyptic book.

I won’t ruin the ending or even how it gets to the ending, but I actually completely understand the way that Gayou went.  I want to write more about it, but anything else I write here will become a spoiler. Let’s just say that I’m excited to see the direction that is taken in the other books in the series.

Sometimes I wonder if Bray picks books that make him laugh out loud at least once in them.  I can’t even think if the last book I read by him made me laugh (it was about a guy out for revenge) but I’m sure it did.  Ever since The Martian, almost every book Bray’s narrated has had me in stitches (even when it’s a serious book). Commune was no different.  Numerous times (pretty much every listening session to and from work) I laughed at least once. Also, any book that Bray read the opening of and says “yeah, I’ll narrate your book” to an author he met on a Reddit AMA says a lot to me.

Overall, Commune Book 1 will easily be a contender for the best book I read in 2017. It’s easily one that I won’t forget for some time.  Before I even finished it I told my wife that she had to listen to it.  I woke up this morning to hear her in the kitchen listening to it.

For dinosaurs, it was a big rock. For humans: Coronal Mass Ejection (CME).

When the Earth is hit by the greatest CME in recorded history (several times larger than the Carrington Event of 1859), the combined societies of the planet’s most developed nations struggle to adapt to a life thrust back into the Dark Ages.

In the United States, the military scrambles to speed the nation’s recovery on multiple fronts including putting down riots, establishing relief camps, delivering medical aid, and bringing communication and travel back on line.

Just as a real foothold is established in retaking the skies (utilizing existing commercial aircraft supplemented by military resources and ground control systems), a mysterious virus takes hold of the population, spreading globally over the very flight routes that the survivors fought so hard to rebuild. The communicability and mortality rates are devastating, leaving only small pockets of survivors scattered throughout the countryside.

Commune Book One is the story of one small group of survivors who must adapt to a primitive, hostile world or die. As they learn the rules of this new era, they must decide how far they’re willing to go to continue living, continually asking themselves the same question daily: is survival worth the loss of humanity? 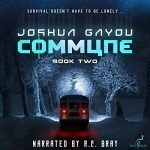