Cool for the Summer by Dahlia Adler (Narrated by Natalie Naudus) 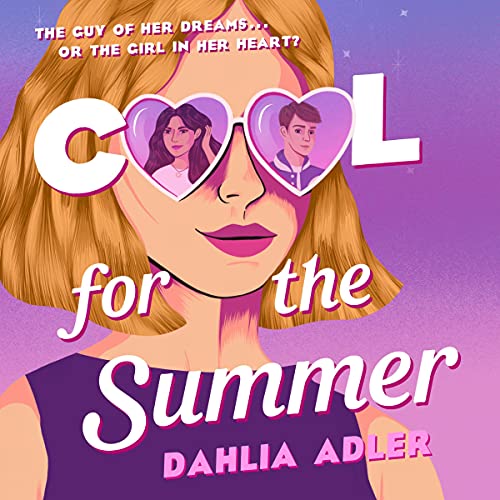 I Really Enjoyed It

I picked this up knowing I was going to enjoy it. Sometimes when I go into a book like that I’m more easily disappointed than if I go in blind – but that was not the case with Cool for the Summer. I’ve never read anything from Adler before but that will not be the case moving forward. This book was funny, cute, and gave me that good feeling you get when you watch a movie you really enjoy.

I think one of the things that I enjoyed the most was just the path of self-discovery that Lara goes through throughout the book. At first she’s basically obsessed with one person and one person only, Chase. But after a summer (that we find about through flashbacks) spent with someone else – she’s not only a changed woman, but she actually gets the guy she’s been pining over for so long. But now that she has him, it’s not everything she dreamed of. Or at least – she realizes that not everything can play out the way that it’s supposed to. I give Adler props for not making Chase the stereotypical jock that he could have been at any point during the story. I found him to be a really likeable person and honestly was rooting for him a few times as things progressed. But, that rooting only took place because he seemed like a genuinely nice guy, not because I thought that Lara should have stayed unhappy.

Jasmine as a character was fascinating as well. I liked the difference between her in the summer and her once the school year started. And the juxtaposition of how Lara was from summer to school. It was a really interesting plot point of the book that I think Adler absolutely nailed.

Overall, Cool For The Summer was an excellent read and a great way to kick of Pride Month for me (totally unplanned). Natalie Naudus knocks this one out of the park – giving Lara and Jasmine life and allowing them to really jump off of the page. And to be frank, I picked this book up knowing that Naudus narrated it. I thought I would enjoy it, but knew that she was going to knock it out of the park.

“Witty, wise, and disarmingly tender. I am hopelessly devoted to this summer dream of a book.” (Becky Albertalli, New York Times best-selling author of Simon vs. the Homo Sapiens Agenda)

Lara’s had eyes for exactly one person throughout her three years of high school: Chase Harding. He’s tall, strong, sweet, a football star, and frankly, stupid hot. Oh, and he’s talking to her now. On purpose and everything. Maybe…flirting, even? No, wait, he’s definitely flirting, which is pretty much the sum of everything Lara’s wanted out of life.

Except she’s haunted by a memory. A memory of a confusing, romantic, strangely perfect summer spent with a girl named Jasmine. A memory that becomes a confusing, disorienting present when Jasmine herself walks through the front doors of the school to see Lara and Chase chatting it up in front of the lockers.

Lara has everything she ever wanted: a tight-knit group of friends, a job that borders on cool, and Chase, the boy of her literal dreams. But if she’s finally got the guy, why can’t she stop thinking about the girl?

Cool for the Summer by Dahlia Adler
Narrator: Natalie Naudus
Length: 6 hrs and 20 mins
Published by Macmillan Audio on May 11th 2021
Genres: YA, RomCom
Format: Audiobook
Buy from Audible