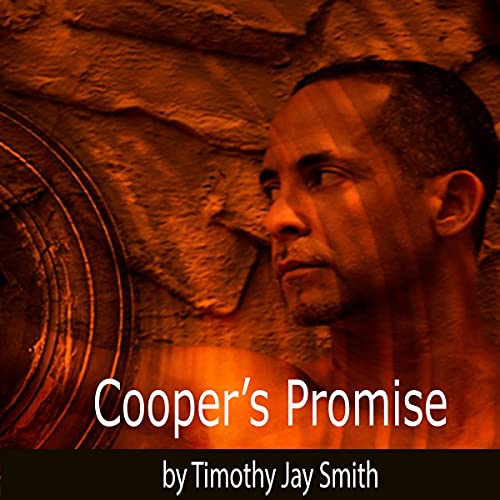 Such An Interesting Book

I honestly didn’t know what I was getting into when I picked this up. The cover does not do this book justice. I don’t like saying that because I know someone, somewhere put time and energy into the cover – but this cover hides so much more than it reveals about Cooper’s Promise.

I’ve also never heard of or read anything else by Timothy Jay Smith, but this won’t be the last book I read of his. It was interesting and really took me on a journey from beginning to end. I can’t quite place my finger on exactly the feelings I had while reading it since they were unique to this book, but I know that I did enjoy it.

Smith was able to build up this suspense that I could almost cut with a knife. It was meaty and kept going throughout the entire book. I wasn’t sure at one point if I was ever going to get a conclusion to all of it, but it did come and wow was it satisfying when it did. Smith was also good at playing on human emotions, both Cooper’s and mine as the reader. That’s something that’s not easy to do, and I think he pulled it off.

I’ve never listened to anything narrated by Ryan Brophy before but I enjoyed his narration quite a bit. It always takes me a few minutes to get into a rhythm with a new narrator – but it didn’t take long at all to figure out how Brophy was going to tell this story.

Overall, Cooper’s Promise was such an interesting book I was left feeling… weird at the end. Not sad, not happy, just like “what just happened?”. I think any book that can flirt with my emotions like that is a winner. I don’t know if everyone would enjoy Cooper’s Promise, but I know that suspense and thriller fans will likely enjoy it. Those who like action and some gore will enjoy it. And anyone who likes a good story should enjoy it as well.

Army sharpshooter and deserter Cooper Chance is trapped. Recruited from Iraq to fight in an African country ravaged by a chronic civil war, Cooper wants nothing more than to go home. Unfortunately, the only thing awaiting him in America is jail, and Cooper is acutely claustrophobic.

Whether he likes it or not, he now leads the life of a mercenary in a gritty world filled with thugs, prostitutes, and corrupt cops. To survive his desperate circumstances, Cooper trades diamonds. One day, he wanders into a diamond shop, where he meets Sadiq, a young merchant as lost in the world as he is. As they fall in love, Cooper has no idea Sadiq has ulterior motives.

Meanwhile, huge oil reserves are discovered nearby, and the CIA offers Cooper a way home without jail time if he agrees to carry out a risky, high-stakes mission. Cooper will do anything to get home – except sell his soul to the devil. But when a teenage prostitute he has promised to save suddenly disappears, Cooper finally relents. Unfortunately, he has no idea that unexpected consequences await.