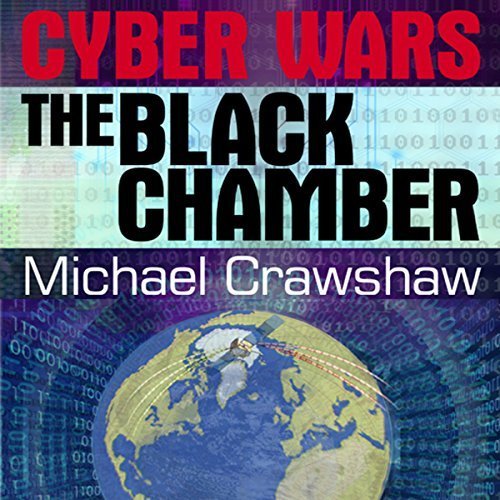 The hardest thing I did while listening to The Black Chamber was watching Jack Ryan at the same time.  The plots were similar enough that I was starting to merge the two.  That says something about Crawshaw’s book – that it can be on par with a character and series created by one of the best writers to ever write Thrillers.

Black Chamber basically tells the story of a hacker who was caught hacking into .gov website(s) and was given a plea deal of “work for us or go to jail”.  He’s described as a punk and everyone who meets him is amazed that he’s doing the job he’s doing. He’s call to investigate massive, well-planned, and extremely effective cyber attacks on different places and venues. From oil rigs to Plum Island the hackers will not leave any stone unturned.

Intermixed into this is an investment firm who seems to keep hitting right before the markets take a turn.  The oil rig is hit – but they just bought in oil futures hoping that the price would go up.  Something feels off about this but it can’t be proven.

The story itself was fast-paced and I thought that the cyber war stuff in it was extremely realistic and not “dumbed down” for the masses.  It was written for someone who’s done some reading into cyber attacks like the Stuxnet attack (it also is funny to hear people claim ownership in this book since no one officially did). But it wasn’t “nerdy” enough to lose most readers.

Overall, I found myself really enjoying this one. It was one of those rare technothrillers that felt real without going too far into the future.

I was talking with Paul from ABR the other day about R.C. Bray and how I will basically pick anything he’s done up.  But there was a post-apocalyptic series he did where it took place in the UK and they wanted him to do a British accent.  I wasn’t sure what he was talking about – but when I started this book I was a little worried.  Bray might be one of my all-time favorite narrators but I do not think that British accents are his strong suit. I can’t tell if Bray gave up on the accent midway through The Black Chamber or if I just got used to it, but it didn’t bug me nearly as much as I thought it would.

When America's infrastructure comes under attack from hackers, the world's most powerful military doesn't know how to respond. Where should it aim its missiles? Could ISIS or North Korea be behind the cyber attacks? And why does a London hedge fund always bet the right way before each market-moving strike?

Enter FBI cyber expert Declin Lehane. But before he can find the real enemy and prevent the crisis from escalating into a global conflict, he must battle the establishment elite, interagency politics, and his own prejudice.