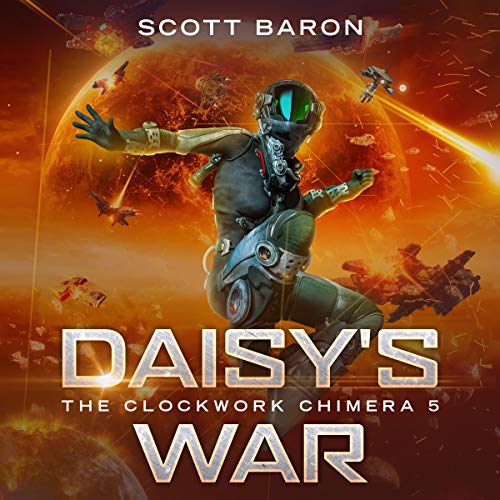 A Great Finale By A Master Storyteller

After finishing Daisy’s War all that I could think was I still can’t believe that this series is over. I’ve loved every moment of it and I’m so glad that Vivienne Leheny was able to bring Daisy and her crew to life. Scott Baron wrote a great story from beginning to end and I’m really glad I got to listen to each story as they were released on audio. The other thing I did was stay away from reviews so that I didn’t accidentally spoil it for myself. But Baron threw in enough “what!?” moments that I don’t think I could have read enough spoilers to actually genuinely spoil all five books.

From the first book in the series to the last – each character has grown so much. We’ve been introduced to so many new people along the way – and each one adds to the story.  Those who were lost in other books might come back at some point, so you never know who is going to show up in a Clockwork Chimera book.

The last two to three hours of this book were a sprint. I couldn’t wait to finish it, but I took my time and savored it. Knowing that once I finished it, I was done with it. (I’m not completely done with Daisy since she makes an appearance in the last few books in Baron’s other series). I’ve come to really like Daisy more and more with every book. You honestly forget some of the bombshell moments from the first two books and in each book she’s given more and more reasons to be liked.

There were a few times in Daisy’s War where I was just reading with my mouth agape thinking “nooo” (both good and bad versions of that exclamation). Baron kept me on my toes and kept throwing different curveballs that I didn’t see coming – even 5 books deep. I love it when a book that you’re so familiar with can still throw you so far off of its scent. This book and honestly, this series has done that for me in almost every book.

I’m happy that it’s over but sad to see it go. If you wanted to pick this series up, you should. Baron is a master storyteller and the Clockwork Chimera series is proof of that.

With powerful forces working behind the scenes, Daisy seemed to be on the path to what may very well be a rousing victory. Or a glorious death, should she fail. For obvious reasons, she hoped for the former rather than the latter.

She and her friends had persevered and come out on the other side time and again. Now they just had to pull together one last time to stand against their greatest foe. Success would mean victory. Failure would mean the loss of all they held dear.

Alliances had been forged, and forces mustered, and her enemies were square in her sights. It was time to act, and Daisy knew she was in for the fight of her life, and on multiple fronts at that. The struggle would be fierce, and blood would certainly be shed, but at the end of the day, she just hoped the majority of it would not be her own.