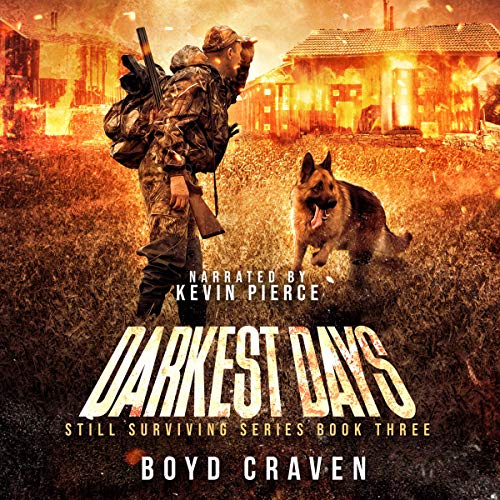 It’s been a while since I’ve read this much drama in a Post-Apocalyptic book.  Not all of the drama is from what you’re used to in PA books as well.  There was some relationship drama in Darkest Days as well.  I thought that Craven did a great job writing it out in a way that felt real and a way that would make sense with his plot so far.  He even got a little meta and talked about (maybe a slight spoiler here) how quickly certain people were forgiven. I chuckled at that.

Darkest Days picks off where book two left off… thank god.  Craven left us in a dark area at the end of the last one and I gave him crap for it.  It was one of the biggest cliffhangers I’ve experienced and I was glad to know that Darkest Days was being released in audio shortly after.  Once Days was released, I picked it up and quickly read the first couple of chapters to make sure all was well (he left quite a lot in the air at the end of the last book).

I fight this inner battle with ~6 hour PA books.  I love them because they contain great stories in small portions but dislike them because authors are able to split books up (basically at a major point in the book) and make you read the next one.  I went to school for marketing, so I get the reason, but it’s also hard when there isn’t an arc.  Thankfully, Craven is good at writing inner-arcs for each story but keeping the overarching arc (well that feels redundant) there for you to pick back up in the next book.

This one might be my favorite so far because it had a bit of everything. There was action, drama, a little romance, a little love triangle, loving dogs, and even some rebuilding action.  Craven definitely wrote another winner with this one and I’m glad that I was able to read it so close to its release (and soon after I finished book two).

I’m not sure how many books he’s expecting to write in this series but I could definitely see it ending in four or five books. It’s definitely feeling like the terror and the “bad guys” days are coming to an end.  I’ll be along for the ride until it’s over though.

Wes, finding himself between a rock and a hard place, had to make an impossible decision, one he's not sure he can forgive himself for. In his journey to always make the right choices, he risks his morals and the safety of those around him. Knowing exactly how he got there and unable to change his decisions, he struggles to keep going day by day.

Lance and Henry weren't working alone, and as more of the opposition group’s actions are showing them to be as evil and twisted as they first seemed. If that wasn’t enough, Wes is betrayed by a friend.

Not one for letting others remain enslaved, Wes’s group decides to go on the offensive. With time running out, and dark forces moving on his family, he has to become more than a simple moonshiner and occasional poacher. He has to survive what’s to be some of his darkest days and keep his humanity.

With Raider being the only sane one left, he must guide his human like he’s never had to before.