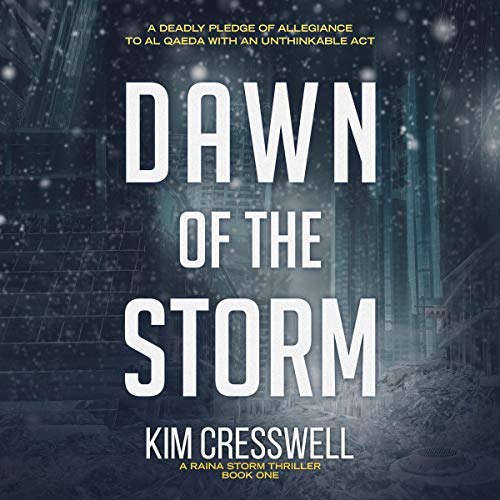 Quick and to the Point

I had never heard of Kim Cresswell before picking up Dawn of the Storm, but I will be seeking her out in the future, especially the continuation of this series.

Dawn of the Storm tells the story of a terrorist plot and how we plan on stopping it using one of our best operatives.  We are quickly introduced to Raina Storm and we’re not sure why they want her and only her for this mission.  But, we also quickly find out that she’s the exact person we need.

Raina was a likable character who did everything almost right (she is human, of course).  Cresswell writes her as this sort of perfect shadowy assassin (in numerous meanings of those words).  And we’re treated to numerous showings of just what she can accomplish.  I could tell that we were being introduced to a character but the plot and story made the introduction interesting and action-packed. Cresswell was able to write action in a way that was fast, brutal, and to the point without sacrificing much.

Overall, I thought that Dawn of the Storm was a good intro book with action, intrigue, and a no-nonsense approach to a terrorist thriller. Short, and to the point, Storm is the first book in a series and I’m curious to see what happens next.

I did not read any of the books where some of these characters were from, but I don’t think it took anything away.  It was a shorter book that did skimp on some details, but it didn’t stop me from understanding who they were, why they were there, and what was going on.

A jihadist pledges his allegiance to al Qaeda with an unthinkable act...and the terrorist cell is just getting started.

Raina Storm, the CIA's most lethal operative, is off the grid, leading a secluded and comfortable life with her six-year-old daughter in Barstow, California. But peace is short-lived when a former FBI agent and an ex-intelligence officer track Raina down and blackmail her into helping them stop a new threat.

In a race against the clock, the team must hunt down the terrorists before a dirty bomb is smuggled out of Colombia and into the United States.