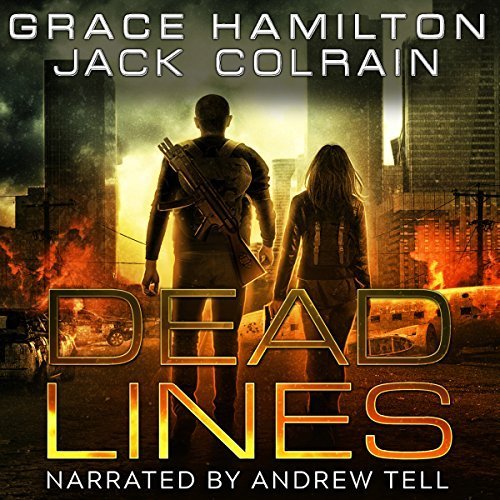 Okay, But Not For Me

Ex-cop, Jim Parker, is now a 911 operator. He gets a call from a girl to say she’s been kidnapped and is just about to say where when the phone goes dead. Something has happened and Jim soon realizes that an EMP has hit. Communication is down! The only thing he knows about the girl is her name. He realizes that he is the only one who can help her and so he sets out to do just that.
I went into this with high hopes, but unfortunately, it fell flat. My main problem with this was overly descriptive writing. I love when a scene is well described and easy to visualize, but you can also be too descriptive. I felt like it was too wordy at times and my mind wandered frequently.
I also found it a little hard to believe that Parker would be so focused on saving this girl, with such determination. I know he is the last person to hear from her, and I know he has issues, but that is all he thinks about. If something like that happened, would it not take some time before it sinks in? Would he not at least try to contact the police, or get some help? I feel like he jumped straight into the rescue without thought or reason.
I just couldn’t connect to the plot and didn’t really connect with the characters, other than Finn, now she was a great character and is the only reason I finished the book. Parker and Ava weren’t as well developed nor as likable as I hoped. Parker is an ex-cop and a prepper who preps for every scenario. He is supposedly prepared for everything, yet he doesn’t have a bunker. He stores his food in his house, in whatever space he can find. I know not every prepper has a bunker, but I felt like making him a prepper was a bit much. It didn’t ring true to all the other post apoc books about preppers I’ve read. I think I would have liked him better if he was just an ex-cop trying to survive in a world gone crazy.
In all, this was ok. I don’t think I’ll continue on with the series though, it’s just not for me.
Andrew Tell read this really well. He was clear and easy to follow and he had plenty of tones and voices for the characters.

911 operator Jim Parker wants - more than anything - to be useful again. When a catastrophic EMP strikes, and he’s the last person a kidnapped girl speaks to before the lines go dead, he knows he can’t let her down. Especially when the circumstances are so similar to his own daughter’s disappearance. With the world falling apart around him, he wants to do nothing more than retreat to his prepper cabin. But with a fresh lead on his daughter, and another innocent girl’s life on the line, the disgraced cop will do everything in his power to track them down.

Finn Meyers has lost Ava, her best, and only, friend in the world, but she knows where the missing young woman might be - and perhaps Parker’s long-lost daughter. Now, Parker must form an uneasy alliance and tackle his own internal demons as the two begin a perilous journey that will take them to the headquarters of a mysterious cult in Indiana. But what they find along the way will shatter all their preconceptions - and threaten the world as they know it. Can a has-been and a has-not save the innocent, and stop a disaster from happening?